Why Lawmakers Should Say No to Tax Extenders, Yes to the Working Families’ Tax Credits

Congress is likely to consider a package of legislation primarily made up of tax breaks for business, known as the “tax extenders.” The cost of passing the tax extenders for two years would be nearly $97 billion according to the Joint Committee on Taxation. The 10-year cost for the continual extension of these provisions would be nearly $740 billion.

Lawmakers should keep three points in mind when considering how to deal with the tax extenders package:

1. Most of the tax extenders are ineffective giveaways to business that should be either substantially reformed or allowed to expire.

2. Any renewal of the tax extenders should be paid for.

3. To really help Americans, Congress should make permanent the enhancements to the EITC and CTC.

1. Most of the tax extenders are not worth keeping.

Of the more than 50 tax extenders, just four, bonus depreciation, the research and experimentation tax credit, the active financing exception (AFE) and the controlled foreign corporations look-through rule (CFC Look-Thru Rule), make up 62 percent of the cost of the package. These tax breaks are costly tax giveaways to large corporations that do not provide much, if anything, in economic gain. They should be allowed to expire.

The most costly tax extender is bonus depreciation, which alone will cost $246 billion over 10 years and represents one-third of the package. Congress first enacted bonus depreciation during the George W. Bush administration as a supposed economic stimulus. It has been reenacted or extended many times since then with no discernible positive effect on business investment. A study by the non-partisan Congressional Research Service (CRS) found that depreciation breaks are “a relatively ineffective tool for stimulating the economy.” Given its ineffectiveness and the fact that the economy has largely recovered, there is no reason to renew this costly provision.

The second most expensive provision of the tax extenders, costing $109 billion over 10 years, is the research credit. While promoting “research” and “innovation” is a laudable goal, the research credit is a poorly targeted way of pursuing that goal. Most of the activity that the credit rewards would have occurred anyway. In addition, the research that ends up being subsidized is often of dubious value, such as the development of new soda flavors and packaging designs. The research credit should either be substantially reformed or allowed to remain expired. It certainly should not be doubled in size, as some in Congress are proposing.

Taken together, the two offshore loopholes in the tax extenders, the CFC Look-Thru Rule and the AFE, would cost almost $100 billion over the next 10 years. These two provisions are what enable many companies like Apple and General Electric to avoid billions in taxes by shifting their profits into offshore tax havens. With the increasing, pernicious use of tax havens by multinational corporations, a good place to start in cracking down on this activity would be to allow these two loopholes to remain expired.

Many of the remaining extenders, representing one-third of the cost, do not provide a substantial enough public benefit to justify their renewal. For a deeper dive into the efficacy of the largest individual tax extenders, read the updated CTJ report “Evaluating the Tax Extenders.” While lawmakers like to tout a tiny deduction for teachers who purchase classroom supplies or the deduction for some college expenses when they talk about the tax extenders, the reality is that these provisions are just window dressing, making up only 1 percent of the overall package.

2. Any renewal of the tax extenders should be paid for.

If lawmakers decide some of the tax extenders are worth keeping, they should pay for them with offsetting tax increases. For years, Congress has been struggling to find acceptable ways to pay for essential programs like the highway bill or to undo some of the budget sequester program cuts. But lawmakers have been willing to throw fiscal responsibility out the window and pass the tax extenders without paying for them. This is a double standard.

It’s important to note the that cost of a two-year extension of the extenders obscures the real cost of the continual renewal of the extenders. If they continue to be extended, then over the next decade, the CBO estimates they will cost $740 billion.

While there are a myriad of ways to raise the revenue needed to offset the cost of any extenders, the most logical way would be to close corporate loopholes. Ideally, this would include legislation that would end offshore tax dodging such as the Stop Tax Haven Abuse Act, an anti-inversion measure like The Corporate Fair Share Tax Act, or ending the deferral of U.S. tax on profits that companies have moved offshore.

3. The expansions to the EITC and CTC should be made permanent.

If Congress really wants to help working families, it should make permanent two other expiring tax provisions, the expansions of the EITC and the CTC that were passed as part of the American Recovery and Reinvestment Act of 2009. If allowed to expire, more than 13 million families with nearly 25 million children would see their benefits cut by an average of $1,073. For families struggling to make ends meet, every dollar counts.

The research on the working families’ tax credits is clear. They can play a powerful role in increasing employment and reducing poverty, which is especially needed during this time of high poverty and growing income inequality.

Congress could also build on the success of the EITC by expanding it to childless workers, who do not see much benefit from the current system. This kind of expansion has gotten support from both Democratic President Barack Obama and Republican Speaker of the House Paul Ryan. A recent Senate proposal along these lines would provide crucial relief to over 10.5 million individuals and families and provide them an average benefit of $604. 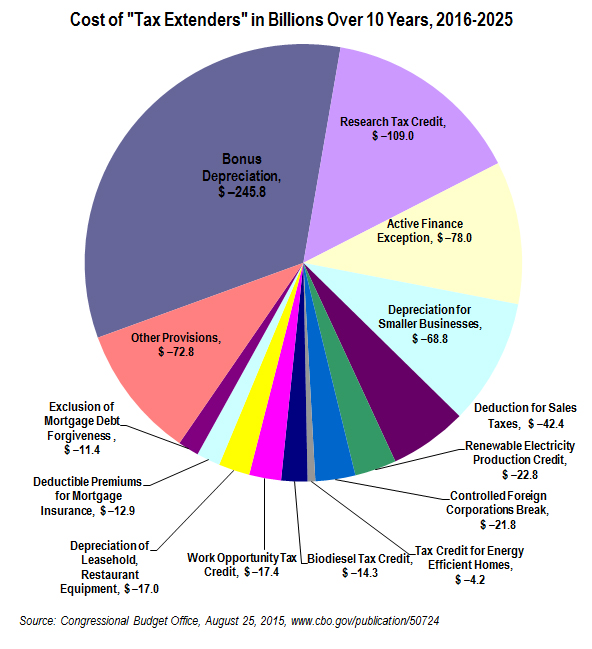