As the 2016 presidential race heats up, Citizens for Tax Justice will dig deep into  candidates’ records and analyze their current policy positions on tax issues. We’ve closely followed the work of many current and potential candidates in recent years, in many cases providing detailed distributional analyses of their tax plans and proposals.

Below is a repository of our reports, blog posts and tax plan analyses. 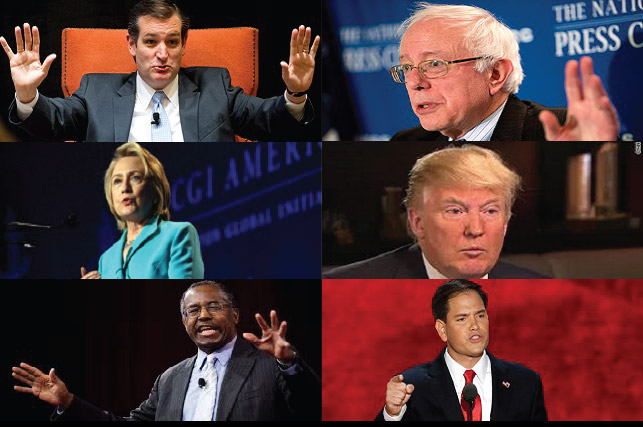 “Clinton has frequently shown a willingness to take a stand for tax fairness but has never fleshed out a clear agenda on these issues and has occasionally embraced regressive or gimmicky tax policies.”

What We Know About Hillary Clinton’s Positions on Tax Issues – April 11, 2015

The Clinton-McCain Gas Tax Proposal: Get Half a Tank Free This Summer – May 2, 2008

What the Presidential Candidates Are Saying about Taxes: Update – November 30, 2007

The Presidential Candidates on Taxes – August 17, 2007

“Senator and now presidential candidate Bernie Sanders has one of the strongest records of any elected official when it comes to standing up for tax fairness. In many cases, Sen. Sanders has been the lone voice in the Senate fighting for legislation that would ensure that corporations and the wealthy pay their fair share.”

The Tax (and Wage) Implications of Bernie Sanders’ “Medicare for All” Health Plan – February 8, 2016

News Release: Sen. Bernie Sanders’ Tax Proposal Would Increase Federal Revenue and Increase after Tax Wages for All but the Top 5 Percent – February 8, 2016

The Estate Tax Is Not Doing Enough to Mitigate Inequality: State-by-State Figures – September 22, 2014

Bernie Sanders Is Right and the Tax Foundation Is Wrong: The U.S. Has Very Low Corporate Income Taxes– April 23, 2013

Citizens for Tax Justice Joins Over 70 Organizations in Support of the Responsible Estate Tax Act – July 30, 2010

Congress Should Approve Bills Introduced in House and Senate to Shut Down Treasury’s $140 Billion Give-Away to Banks – November 24, 2008

“At a time when many governors stubbornly rejected new revenues despite their states’ weak fiscal positions, former Maryland Gov. Martin O’Malley’s was one of only a few governors who championed tax increases to preserve his state’s public investments even during the Great Recession.”

New From ITEP: Maryland Tax Bill Would Improve Tax Fairness and Revenue – May 16, 2012

Gubernatorial Candidates with Progressive Positions on Taxes Who Won – November 5, 2010

Another Example of the Power of Service Sector Lobbyists – April 11, 2008

Maryland Governor Proposes to Close Fiscal Gap with Regressive Taxes — and A Few Progressive Ones, Too – September 21, 2007

“As a presidential candidate running for the Democratic nomination in 2016, Lincoln Chafee has yet to lay out a vision on tax issues, so the only indications so far of what his positions may be lie within his record as a former U.S. Senator and Governor in Rhode Island. And the evidence suggests that Chafee largely supported fiscally responsible tax policies, even when such positions were unpopular among his fellow lawmakers.”

Rhode Island Governor Would Improve Tax System, But Could Do Better – March 11, 2011

Gubernatorial Candidates with Progressive Positions on Taxes Who Won – November 5, 2010

“When it comes to tax reform, former Virginia senator and Democratic presidential candidate Jim Webb has publicly discussed conflicting views.  Webb has proposed taxing investment income at the same higher tax rate that applies to wages. He has also proposed ending offshore profit-shifting by multinational corporations by closing the “deferral” loophole. On the other hand, Webb suggests that the nation should consider “shifting our tax policies away from income and more toward consumption.” Such policies would be highly regressive.”

“Yet another presidential candidate is making a mockery of populism by trumpeting a massive tax break for the rich as a plan that will benefit average Americans. The top 1 percent of Americans will receive an average tax break of $227,000 per year while the bottom 20 percent will receive an average tax cut of only $250. Trump claims the plan will be revenue neutral, but he has made bombastic exaggerations before and this time is no different. In fact, there is no possibility that this plan would not be a gigantic tax cut for the rich and a gigantic revenue loser for the government.”

Trump’s Criticism of Jeff Bezos as a Tax Dodger is Half-Right – December 9, 2015

What Trump Gets All Wrong About Immigration and Taxes – August 25, 2015

“Dr. Ben Carson enters the Republican presidential field without any significant legislative experience so he doesn’t have a record on tax policy. But in a 2013 op-ed, the well-respected neurosurgeon explained his avid support for a flat tax system. The case Carson made for the flat tax is based on a number of falsehoods about our current tax system and how a flat tax would work in practice.”

Dr. Ben Carson enters the Republican presidential field without any significant legislative experience so he doesn’t have a record on tax policy. But in a 2013 op-ed, the well-respected neurosurgeon explained his avid support for a flat tax system. The case Carson made for the flat tax is based on a number of falsehoods about our current tax system and how a flat tax would work in practice. “

Presidential Candidate Dr. Ben Carson Once Avidly Argued for a Flat Tax — And Got the Facts Wrong – May 5, 2015

“Based on what we know from her time as a corporate CEO and a candidate for the U.S. Senate, Fiorina’s call for the public to stand up to the political class may be all talk. Instead, she may ally with corporate influencers.”

“Sen. Rubio’s newest tax deform plan is a much larger version of his gimmicky tax proposals of years past. In each case, he attempts to get credit for touting tax cuts, while at the same time hiding the real cost of his proposals. The crucial difference this time around is the sheer scale of the damage his tax reform plan would do to tax fairness, public programs and the U.S. economy if it were ever enacted.”

“Texas Senator, and now presidential candidate, Ted Cruz is a supporter of radical tax plans that would dramatically increase taxes on poor and middle class Americans in order to pay for huge tax cuts for the wealthiest Americans.”

How Presidential Candidate Ted Cruz Would Radically Increase Taxes on Everyone But the Rich – March 23, 2015

“No member of Congress has been more active in the cause of protecting tax cheaters and tax avoidance by our nation’s wealthiest individuals and corporations than Sen.(now presidential candidate) Rand Paul.”

“Despite having a relatively moderate record on tax policy as the governor of Arkansas, Mike Huckabee has wholeheartedly embraced a radically regressive tax plan as a central plank of his presidential candidate platform.”

The Republican Presidential Primary: And In This Ring… – December 21, 2007

What the Presidential Candidates Are Saying about Taxes: Update – November 30, 2007

The Presidential Candidates on Taxes – August 17, 2007

“While Louisiana Governor Bobby Jindal has yet to lay out a specific tax plan in the run up to his presidential campaign announcement, he has fought to reduce taxes for the wealthy and corporations at the expense of everyone else. He outlined his vision in his 2013 plan that sought to eliminate the state’s income tax and replace it with revenue from an expanded sales tax, a reform that would dramatically cut taxes for the wealthy while increasing them for at the expense of low- and middle-income people.”

Bobby Jindal’s Louisiana is a Cautionary Tale for the Nation – June 24, 2015

Louisiana Legislators Try to Avoid the Wrath of Grover Norquist – May 28, 2015

Louisiana Tax Overhaul Collapse as Bellwether? We Can Only Hope. – April 17, 2013

Jindal Leaves Inconvenient Details Out of His Tax Plan – March 15, 2013

Proposal to Eliminate Income Taxes Amounts to a Tax Increase on Bottom 80 Percent of Louisianans – January 11, 2013

How Louisiana Celebrates the Second Amendment: A Sales Tax Holiday for Guns – September 7, 2011

Louisiana: Repeal of Income Taxes So Radical Even Governor Jindal Cannot Support It – May 25, 2011

“During his five years in office, New Jersey Gov. and now presidential candidate Chris Christie has consistently blocked progressive tax increases and sought to pass regressive and fiscally irresponsible tax cuts. The starkest example of how Gov. Christie has sought to make New Jersey’s tax code more unfair is that he consistently vetoed a small tax rate increase on millionaires but (conveniently until this week) refused to reverse his cuts to the state’s earned income tax credit (EITC). On the federal level, Gov. Christie has similarly laid out a broad tax cut plan that would heavily favor the wealthiest taxpayers while simultaneously slashing federal revenue.”

Tax Increase to Fund Transportation Should Be Combined with Credit to Help Low-Income Families – January 26, 2015

State Treasurer Confesses: Our Job is to Protect Millionaires – May 2, 2012

Failure to Address Gas Tax Costs New Jersey Over a Half a Billion Dollars a Year – December 15, 2011

“Nine-term congressman and current Ohio Gov. John Kasich has received  accolades for his perceived position as the “moderate” or “compassionate” candidate in the 2016 GOP presidential race. It’s true that he embraced a few policies benefiting low-income families, notably the expansion of Medicaid, but a handful of progressive policies do not a moderate make. The bulk of Kasich’s economic agenda as a governor and former congressman has been pursuing tax cuts for the wealthy and increasing taxes on low- and middle-income families. “

Although He Left out Key Details, It’s Clear Kasich’s Tax Plan Is a Deficit-Busting Giveaway to the Wealthy – October 15, 2015

Tax Policy and the Race for the Governor’s Mansion: Ohio Edition – September 12, 2014

Income-tax cut would favor affluent Ohioans- Middle-income residents on average would get $51 a year – April 22, 2013

Income-tax cut would favor affluent; Middle-class Ohioans wouldn’t get enough for a tank of gas – March 19, 2012

Analysis finds that cutting Ohio’s tax on capital gains would be costly, 92% of Ohioans would get nothing – March 14, 2011

Ohio Governor: Get Mojo Back by Slashing Taxes for Wealthy Investors – February 11, 2011

Two States Turning Their Back on Federal Stimulus Dollars; Another Stands Ready to Take the Money – November 19, 2010

“After his 2011 election, Wisconsin Gov. Scott Walker aggressively pursued and helped pass a series of tax cuts in 2011, 2013, 2014 and 2015. His policies pushed the state into bad fiscal straits and there is no evidence that tax changes enacted under his leadership have had the positive impact on the state’s economy that he promised. In addition, Gov. Walker has hinted that he favors repealing state and federal income taxes, a move that would make the tax system substantially more regressive.”

The Realities of Governing Will Put Candidates’ Anti-Tax Rhetoric to the Test – November 6, 2014

Tax Shifts Would Cut Taxes for Richest, Raise Taxes on Others – October 15, 2014

Tax Policy and the Race for the Governor’s Mansion: Wisconsin Edition – July 14, 2014