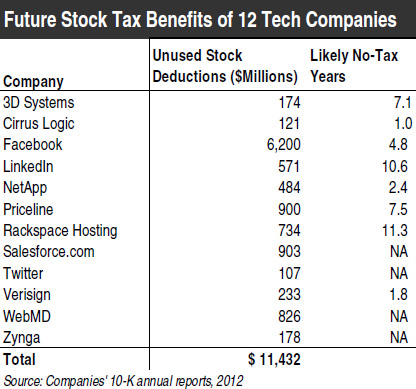 Tax breaks for executive stock options have become an increasingly effective corporate tax-avoidance tool. An April CTJ report identified 280 Fortune 500 corporations that disclosed benefiting from this tax break during the past three years.[i] But for many newer firms that have chosen to pay their executives in the form of lavish stock options, the lion’s share of these tax breaks have yet to be realized.  This CTJ report explains how twelve emerging tech firms (including Twitter, which has scheduled its IPO for this week) stand to eliminate all income taxes on the next $11.4 billion they earn—giving these companies $4 billion in tax cuts.

The tech companies profiled in this report typically issue stock options to their executives at an early stage of the companies’ development—which often means these companies aren’t sufficiently profitable to use these tax breaks immediately and must carry them forward to future years. When these companies eventually become profitable, they can sometimes use these stored-up tax breaks to avoid paying income taxes for years.  Some (but far from all) of these companies disclose, in their annual “10-K” financial reports, the cumulative amount of unused stock option deductions they forecast they will be able to use in the future.

The table on this page shows a dozen emerging tech companies that have amassed enough unused stock option tax breaks to avoid tax on a total of $11.4 billion in income. For example:

–Priceline discloses having $900 million of unused stock option deductions—meaning that the next $900 million the company earns could be tax-free as a result. Since Priceline’s U.S. income averages $119 million a year, this means the company could face the prospect of paying no federal income tax for almost 8 years going forward.

–Twitter has $107 million of unused stock option deductions—meaning that the next $107 million the company earns could be tax-free as a result of this single tax break. (Since the company has not yet reported a profitable year in the US, it’s impossible to estimate how long it will take the company to earn this amount going forward.)

—Cloud-computing company NetApp holds $484 million in unused deductions for stock options. At their current profit levels, this means the company’s taxes could pay no income taxes for more than two years.

— Even after claiming a whopping $1 billion of stock option tax breaks in 2012, Facebook still has $2.17 billion in unused tax breaks that may be used to offset future income. At the 35 percent federal tax rate, this means the company’s next $6.2 billion in U.S. earnings could be tax free.[ii]

–LinkedIn can use the stock option tax break to eliminate income tax on $571 million in income going forward. This could zero out their taxes for the next ten years.

–Rackspace Hosting holds $734 million in unused deductions—potentially avoiding any income tax for more than a decade.

—Verisign’s $233 million in unused stock option deductions could offset all of the company’s taxable income for almost two years.

Most big corpora­tions give their executives (and sometimes other employees) options to buy the company’s stock at a favorable price in the future. When those options are exercised, corporations can take a tax deduction for the difference between what the employees pay for the stock and what it’s worth (while employees report this difference as taxable wages). But unlike the wages earned by most employees, the stock options granted to executives don’t result in a dollar-for-dollar cash outlay by corporations—so the case for allowing companies to deduct stock option “expense” as a cost of doing business is weak.

The stock option tax break can have a huge impact on companies’ tax payments in a given year. For example, this tax break allowed Amazon to reduce its federal and state income taxes by $750 million between 2010 and 2012. The company’s combined federal and state effective tax rate over this period was just 9.4 percent; absent the stock option tax break, the combined tax rate would have been 40.4 percent. Put another way, this tax break singlehandedly reduced the company’s effective tax rate by 31 percentage points over three years.

Pending Legislation Would Reduce, But Not Eliminate, the Stock Option Tax Break

Allowing companies to deduct “expenses” they never actually paid, as the current stock option rules do, means that profitable companies rewarding their executives with lavish stock options have a simple strategy for avoiding their income tax liability. This shifts the cost of funding public investments onto ordinary taxpayers, including businesses that pay their employees in salaries and wages. Paring back the tax break in the manner proposed by Senator Levin, or eliminating it entirely, would help make the corporate tax fairer and more sustainable in the long run.

[ii] Some corporations report the amount of deductions from stock options they have accumulated (the amount of profits that will be sheltered from taxes because of these tax breaks), while others report the amount by which their taxes will be reduced because of these deductions. Facebook does the latter, reporting that its tax bills will be reduced by $2.17 billion, which implies that it has accumulated $6.2 billion in deductions for stock options.

[iii] Granting employees the right to buy stock at a set price even if the market price is higher does not cost the corporation anything and therefore should not result in a tax deduction for the corporation. The situation is analogous to airlines allowing their employees seats on flights that are not full, which costs the airlines nothing and does not result in any tax deduction for them.