Boeing, Recipient of the Largest State Tax Subsidy in History, Paid Nothing in State Corporate Income Taxes Over the Past Decade 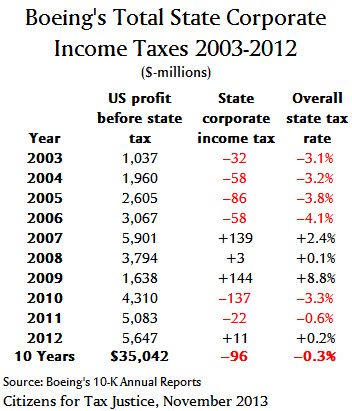 On November 12th, Washington Governor Jay Inslee signed into law the largest state business tax break package in history for Boeing.[1] The new law will give Boeing and its suppliers an estimated $8.7 billion in tax breaks between now and 2040. Even before this giant new subsidy, Boeing has already been staggeringly successful in avoiding state taxes. Over the past decade, Boeing has managed to avoid paying even a dime of state income taxes nationwide on $35 billion in pretax U.S. profits.

Boeing also has aggressively pursued sales and property tax breaks in states around the country. It employs an army of site location and tax consultants, whose job has been to blackmail states into giving Boeing lavish tax breaks.[3]

Things are not any better at the federal level. From 2003 to 2012, Boeing received $1.8 billion in federal income tax rebates on its $35 billion in U.S. profits.

Perhaps Washington State’s new $8.7 billion tax subsidy will be a wake-up call to state lawmakers about how damaging their competition with other states has become and that they need to reject the policy of creating special corporate subsidies.

[2] Washington has no state income tax, but other states that Chicago-headquartered Boeing does business in do have corporate income taxes.