Citizens for Tax Justice presents a detailed tax reform plan that accomplishes the goals we set out in an earlier report: raise revenue, enhance fairness, and end tax incentives for corporations to shift jobs and profits offshore.

CTJ’s tax reform proposal would accomplish this by ending some of the biggest breaks for wealthy individuals and corporations, including the special low tax rates for the investment income that mostly goes to the richest Americans and the rule allowing American corporations to “defer” (sometimes forever) paying U.S. taxes on their offshore profits.

The result would be $2 trillion in increased revenue over a decade, plus some additional revenue that would be raised in the first decade due to shifts in the timing of tax payments. The top personal income tax rate would be 36 percent — but this would apply to all income, including capital gains and stock dividends that are now taxed at much lower rates. Corporations would no longer have any incentive to tell the IRS that their U.S. profits are actually earned in a tax haven like Bermuda or the Cayman Islands because they would be taxed at the same rate no matter where they are earned. 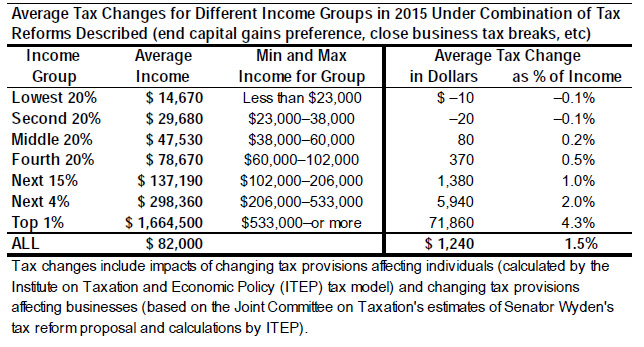