The U.S. Continues to Be One of the Least Taxed of the Developed Countries 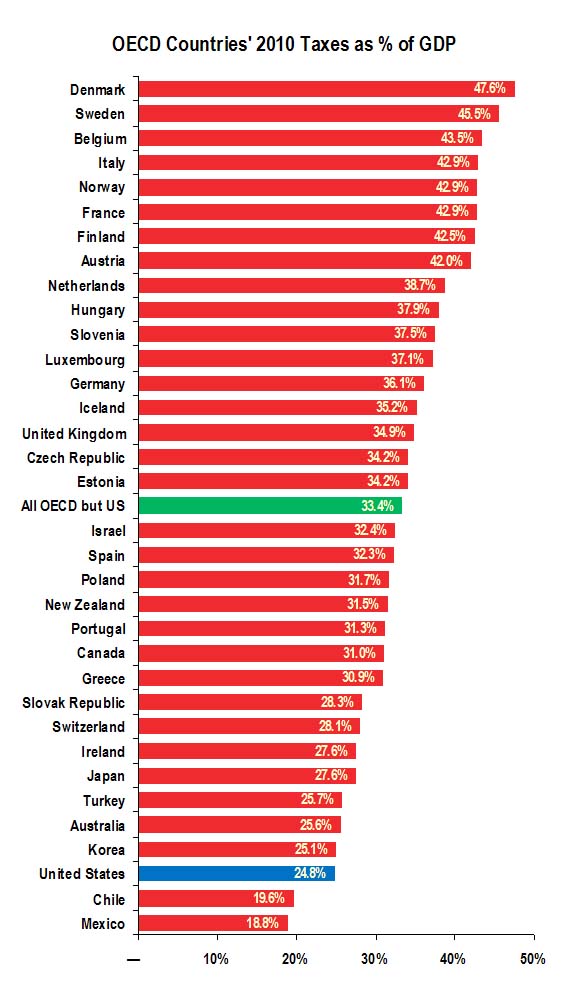 The U.S. was the third least taxed country in the Organization for Economic Cooperation and Development (OECD) in 2010, the most recent year for which OECD has complete data.

Of all the OECD countries, which are essentially the countries the U.S. trades with and competes with, only Chile and Mexico collect less taxes as a percentage of their overall economy (as a percentage of gross domestic product, or GDP).

This sharply contradicts the widely held view among many members of Congress that taxes are already high enough in the U.S. and that any efforts to reduce the federal deficit should therefore take the form of cuts in government spending.

As the graph to the right illustrates, in 2010, the total (federal, state and local) tax revenue collected in the U.S. was equal to 24.8 percent of the U.S.’s GDP.

The total taxes collected by other OECD countries that year was equal to 33.4 percent of combined GDP of those countries.

As the table below illustrates, the U.S. has steadily moved closer and closer to becoming the least taxed OECD country over the past three decades.

Taxes collected by other OECD countries as a percentage of GDP have been above 31 percent throughout this period of years, and in some years have exceeded 34 percent.

In the U.S., taxes as a percentage of GDP never even exceeded 29 percent during this period, except for three years (1998 through 2000). After that, taxes were reduced by the Bush-era tax cuts and other changes, most of which were made permanent in the legislation approved by Congress on New Year’s Day to address the “fiscal cliff.”[i]

[i] For more information about the effects of the “fiscal cliff” deal, see Citizens for Tax Justice, “New Tax Laws in Effect in 2013 Have Modest Progressive Impact,” April 2, 2013.