Earlier this week, President Barack Obama released details of his proposed federal budget for the fiscal year ending in 2017. The proposal includes a one-time “transition tax” on the offshore profits of all U.S.-based multinational corporations. The President’s plan would tax these profits at a 14 percent rate immediately, rather than at the 35 percent rate that should apply absent the “deferral” loophole. This proposal, like an alternative Republican plan that would tax these profits at an even lower 8.75 percent rate, would lavish huge tax cuts on the many corporations currently holding such profits, often actually earned in the U.S., in low-rate foreign tax havens. Ten of the biggest offshore tax dodgers would receive a collective tax break of $97 billion under Obama’s plan, and $121 billion under the Republican alternative. 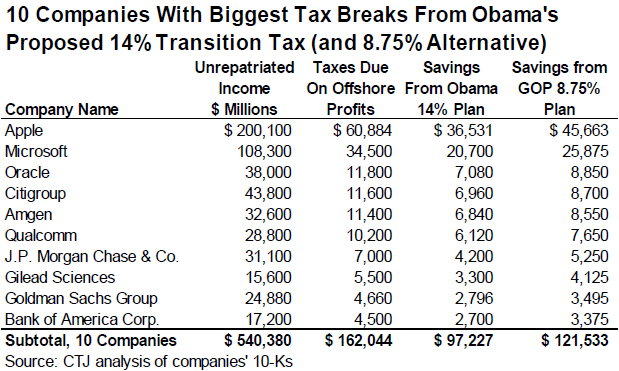 The table on this page shows the ten companies that would enjoy the largest tax breaks from a “transition tax” at 14 percent and 8.75 percent.

–Apple currently holds $200 billion of its cash offshore. Under current rules, the company should pay $61 billion when these profits are repatriated. But the Obama plan would allow them to reduce that tax bill by $36.5 billion, and the GOP plan would save Apple $45.6 billion.

–Microsoft would see a $20.7 billion tax cut on its $108 billion in so-called offshore profits under the Obama proposal, and a $25.9 billion cut under the Republican alternative.

—Large financial companies with substantial cash parked offshore for tax purposes would benefit handsomely from the President’s proposal as well: Citigroup would enjoy a nearly $7 billion tax cut, while JP Morgan Chase would see a $4.2 billion tax break. Goldman Sachs and Bank of America would receive tax breaks of $2.8 billion and $2.7 billion, respectively.

While these companies operate in different economic sectors, what they have in common is that each has at least $15 billion in profits that they have designated as “permanently reinvested” in other countries, and (more importantly) that each have admitted, in the detailed notes of their annual financial reports, paying foreign tax rates substantially below the U.S. statutory rate on these offshore profits.

Although the President has not given a detailed rationale for taxing offshore profits at a 14 percent rate, it’s hard to see why his approach makes sense. The companies currently holding profits in foreign tax havens for tax purposes accumulated these profits over a period of time when the statutory federal tax rate was 35 percent. During this time, many companies that did not shift profits offshore did pay a 35 percent tax rate on their U.S. profits. It seems only fair that the companies that dodged taxes by shifting their profits offshore should pay the same rate.

This seems especially obvious when looking at the ten companies profiled here, almost all of which have essentially admitted that their offshore cash is located in tax havens in which the tax rate is in the single digits. For example, Microsoft says it would pay a 31.9 percent tax rate if its purportedly offshore profits were taxed. Since the tax it would pay would be equal to the 35 percent statutory tax rate minus any foreign taxes already paid, the clear implication is that the company has paid only a 3.1 percent tax rate on its offshore. Rewarding Microsoft with a low 14 percent tax rate on its offshore holdings would amount to a huge, and unwarranted, tax bonanza at the expense of American taxpayers.

The fiscal cost of allowing a special low tax rate on unrepatriated profits goes well beyond the tax breaks that would accrue to these ten companies: a 2015 CTJ report estimated that Fortune 500 companies overall have avoided $620 billion in federal income taxes on their offshore profits. Taxing these profits at anything less than the 35 percent statutory tax rate would give hundreds of companies a tax reward for hiding their profits offshore—and would mean that a substantial share of this $620 billion in unpaid taxes would remain that way permanently.