Read this report in PDF (Includes Company by Company Appendixies)

It’s been well documented that major U.S. multinational corporations are stockpiling profits offshore to avoid U.S. taxes. Congressional hearings over the past few years have raised awareness of tax avoidance strategies of major technology corporations such as Apple and Microsoft, but, as this report shows, a diverse array of companies are using offshore tax havens, including the pharmaceutical giant Amgen, apparel manufacturers Levi Strauss and Nike, the supermarket chain Safeway, the financial firm American Express, banking giants Bank of America and Wells Fargo, and even more obscure companies such as Advanced Micro Devices and Symantec.

All told, American Fortune 500 corporations are avoiding up to $695 billion in U.S. federal income taxes by holding $2.4 trillion of “permanently reinvested” profits offshore. In their latest annual financial reports, 27 of these corporations reveal that they have paid an income tax rate of 10 percent or less in countries where these profits are officially held, indicating that most of these monies are likely in offshore tax havens.

How We Know When Multinationals’ Offshore Cash Is in Tax Havens

Offshore profits that an American corporation “repatriates” (officially brings back to the United States) are subject to the U.S. tax rate of 35 percent minus a tax credit equal to whatever taxes the company paid to foreign governments. Thus, when an American corporation reports it would pay a U.S. tax rate of 25 percent or more on its offshore profits, that indicates it has paid foreign governments a tax rate of 10 percent or less.

Twenty-seven American corporations have acknowledged paying less than a 10 percent foreign tax rate on the $561 billion they collectively hold offshore. The table on the following page shows the disclosures made by these 27 corporations in their most recent annual financial reports.

It is almost always the case that profits reported by American corporations to the IRS as earned in tax havens were actually earned in the United States or another country with a tax system similar to ours.  Most economically developed countries (places where there are real business opportunities for American corporations) have a corporate income tax rate of at least 20 percent, and typically tax rates are higher.

Countries that have no corporate income tax or a very low corporate tax —such as Bermuda, the Cayman Islands, and the Bahamas — provide very little in the way of real business opportunities for American corporations like Qualcomm, Safeway, and Microsoft. But large corporations use accounting gimmicks (most of which are allowed under current law) to make profits appear to be earned in tax haven countries. In fact, a 2014 CTJ examination of corporate financial filings found U.S. corporations collectively report earning profits in Bermuda and the Cayman Islands that are 16 times the gross domestic products of each of those countries, which is clearly impossible. 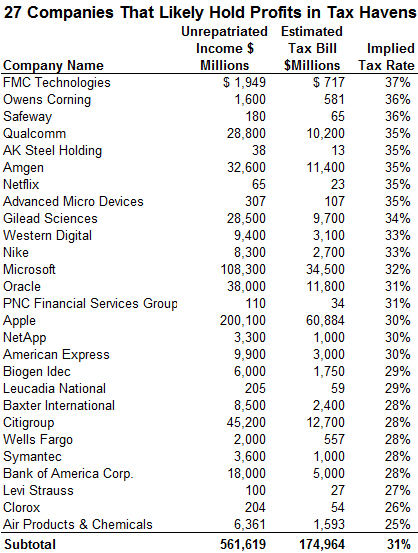 At the end of 2015, 303 Fortune 500 companies collectively held $2.4 trillion offshore. (A full list of these 303 corporations is published as an appendix to this paper.)

The 27 companies that report the U.S. tax rate they would pay if they repatriated their profits are not alone in shifting their profits to low-tax havens but they are alone in disclosing the practice.  The vast majority of profit-shifting companies — 248 out of 303 —decline to disclose the U.S. tax rate they would pay if these offshore profits were repatriated. (55 corporations, including the 27 companies shown on this page, disclose this information. A full list of the 55 companies is published as an appendix to this paper.) The non-disclosing companies collectively held $1.74 trillion in unrepatriated offshore profits at the end of 2015.

Accounting standards require publicly held companies to disclose the U.S. tax they would pay upon repatriation of their offshore profits, but these standards also provide a gaping loophole allowing companies to avoid disclosing this information by asserting that calculating this tax liability is “not practicable.”  Almost all of the 248 non-disclosing companies use this loophole to avoid disclosing their likely tax rates upon repatriation even though these companies almost certainly have the capacity to estimate these liabilities.

It’s impossible to know precisely how much income tax the 248 non-disclosing companies would owe if they repatriated their profits. But if these companies paid the same 28.6 percent average tax rate as the 55 disclosing companies, the resulting, collective one-time tax would total $499 billion. Added to the $196 billion tax bill estimated by the 55 companies who did disclose, this means that taxing all “permanently reinvested” foreign income of the 303 companies at the current federal tax rate could result in $695 billion in added corporate tax revenue. 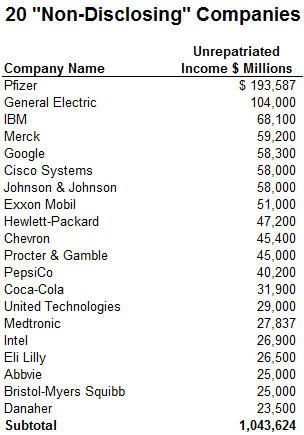 While hundreds of companies refuse to reveal the tax they likely owe on their offshore cash, just a handful of these companies account for the lion’s share of the permanently reinvested foreign profits in the Fortune 500. The nearby table shows the 20 non-disclosing companies with the biggest offshore stash at the end of the most recent fiscal year. These 20 companies held $1 trillion in unrepatriated offshore income — more than half of the total income held by the 248 “non-disclosing” companies. Most of these companies also disclose, elsewhere in their financial reports, owning subsidiaries in known tax havens. For example:

■ General Electric disclosed holding $104 billion offshore at the end of 2015. GE has subsidiaries in the Bahamas, Bermuda, Ireland and Singapore, but won’t disclose how much of its offshore cash is in these low-tax destinations.

■ Pfizer has subsidiaries in the Cayman Islands, Ireland, the Isle of Jersey, Luxembourg and Singapore, but it does not disclose how much of its offshore profits are stashed in these tax havens.

■ The Coca-Cola Corporation has three Cayman Islands subsidiaries, but the company’s limited financial disclosure doesn’t specify how much of its $31.9 billion in offshore profits are being “earned” there.

■ Merck has 11 subsidiaries in Bermuda alone. It’s unclear how much of its $59 billion in offshore profits are being stored (for tax purposes) in this tiny island.

While corporations’ offshore holdings have grown gradually over the past decade, there are two reasons it is vital that Congress act promptly to deal with this problem. First, a large number of the biggest corporations appear to be increasing their offshore cash significantly. Seventy-nine of the companies surveyed in this report increased their declared offshore cash by at least $500 million each in the last year alone. Twelve particularly aggressive companies each increased their permanently reinvested foreign earnings by more than $5 billion in the past year. These include Apple, Microsoft, Pfizer, Gilead Sciences, Danaher, Google, Chevron, Medtronic, IBM, Oracle, Cisco Systems and Sealed Air.

A second reason for concern is that companies are aggressively seeking to permanently shelter their offshore cash from U.S. taxation by engaging in corporate inversions, through which companies acquire smaller foreign companies and reincorporate in foreign countries, thus avoiding most or all U.S. tax on their profits. 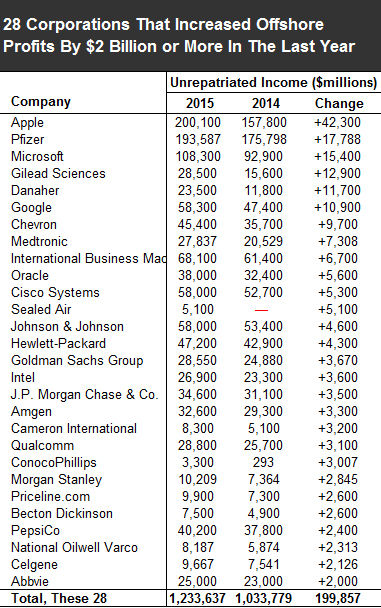 Many large multinationals that fail to disclose whether their offshore profits are officially in tax havens are the same companies that have lobbied heavily for tax breaks on their offshore cash. These companies propose the government either enact a temporary “tax holiday” for repatriation, which would allow companies to officially bring offshore profits back to the U.S. and pay a very low tax rate on the repatriated income, or give them a permanent exemption for offshore income in the form of a “territorial” tax system. Either of these proposals would increase the incentive for multinationals to shift their U.S. profits, on paper, into tax havens.

A far more sensible solution would be to simply end “deferral,” that is, repealing the rule that indefinitely exempts offshore profits from U.S. income tax until these profits are repatriated. Ending deferral would mean that all profits of U.S. corporations, whether they are generated in the U.S. or abroad, would be taxed by the United States in the year they are earned. Of course, American corporations would continue to receive a “foreign tax credit” against any taxes they pay to foreign governments, to ensure profits are not double-taxed.

The limited disclosures made by a handful of Fortune 500 corporations show that corporations are brazenly using tax havens to avoid taxes on significant profits. But the scope of this tax avoidance is likely much larger, since the vast majority of Fortune 500 companies with offshore cash refuse to disclose how much tax they would pay on repatriating their offshore profits.

Lawmakers should resist calls for tax changes, such as repatriation holidays or a territorial tax system that would reward U.S. companies for shifting their profits to tax havens.  If the Securities and Exchange Commission required more complete disclosure about multinationals’ offshore profits, it would become obvious that Congress should end deferral, thereby eliminating the incentive for multinationals to shift their profits offshore once and for all.