Update March 9th, 2016: Click here or scroll down to see a new addendum showing the cost of Rubio’s tax plan with alternative assumptions regarding his proposed refundable credit and his treatment of personal exemptions.

A new Citizens for Tax Justice analysis of Marco Rubio’s tax plan reveals that it would add $11.8 trillion to the national debt over a decade. More than a third of Rubio’s tax cuts would go to the best-off 1 percent of Americans.

What the Rubio Plan Would Do

The bottom 20 percent would receive a substantial cut of 13.9 percent as a percentage of their income due to Rubio’s creation of a $2,000 refundable tax credit for singles and $4,000 for married couples in place of the standard deduction, along with a huge expansion of the partially refundable per-child credit. CTJ’s modeling assumes that the standard credits would be fully refundable based on Rubio’s latest description of his tax plan.[i] Despite Rubio’s promise, however, his campaign staff has suggested that there would be rules denying standard credit refunds to non-workers and current non-filers. If such rules were proposed, the tax cuts for the bottom income group would be somewhat lower than our analysis shows. On the other hand, such rules would be hard to police, given the incentive the credit would create to report some earnings (even if none exist). [ii]

Overall, we found that: 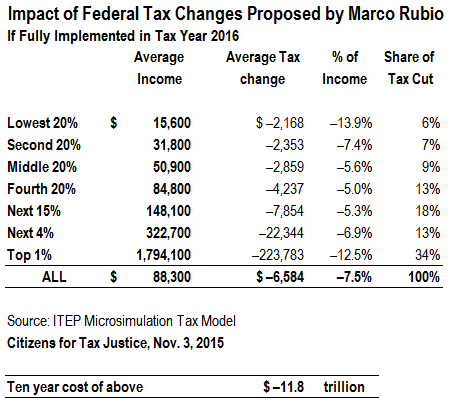 How the Rubio Plan Would Cut Personal Income Taxes:

As a modest offset, the plan eliminates all itemized deductions with the exception of the charitable contributions and the mortgage interest deductions, which would now be available to all taxpayers. This change would more than double the number of taxpayers who would itemize their deductions.

How the Rubio Plan Would Cut Corporate Income Taxes:

“By eliminating personal taxes on capital gains and other investment income, repealing the estate tax and cutting the corporate income tax by about half, Rubio’s plan hugely favors the wealthy,” said CTJ Director Bob McIntyre. “And by reducing revenues by almost $12 trillion over a decade, his plan will require draconian cuts to essential public services and likely wreck our economy.”

In the table below we adjusted the estimated size of Rubio’s tax cuts downward from our previous estimate, based on new information that his advertised “refundable” standard credit would not be nearly as refundable as he has publicly claimed, and that the new credit would replace not only the standard deduction but also taxpayer personal exemptions (but not dependents’ exemptions). 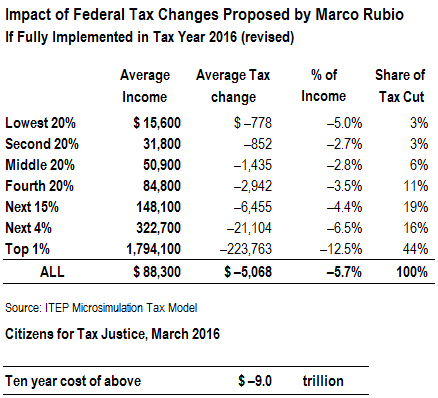 [i] “A Pro-Growth, Pro-Family Tax Plan for the New American Century” https://marcorubio.com/issues-2/rubio-tax-plan/

[ii] The Rubio campaign is quoted as saying “Rules would be tailored to ensure that our reforms would not create payments for new, non-working filers.” Dylan Matthews, “Marco Rubio and John Harwood’s testy debate exchange on taxes, explained.” October 30, 2015. http://www.vox.com/2015/10/30/9642850/marco-rubio-john-harwood