A Citizens for Tax Justice analysis of Jeb Bush’s tax plan reveals that it would cut taxes by $7.1 trillion[i] over a decade, and it would give almost half of its tax cuts to the wealthiest 1 percent of Americans.

What the Bush Plan Would Do

Under Bush’s plan, every income group would see a tax cut. But the plan’s tax changes would reserve the biggest benefit for the very best-off Americans. As a share of income, the top 1 percent would collectively see a tax cut equal to 10.2 percent of their income, more than two and a half times the tax changes enjoyed by any other income group, and nearly five times the size of the tax cuts that would go to the poorest 20 percent of Americans. 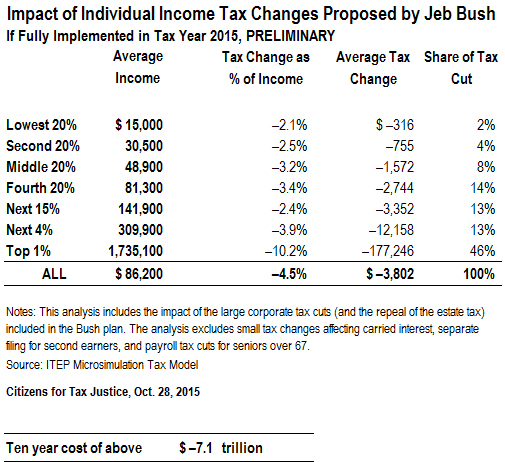 How the Bush Plan Would Cut Personal Income Taxes:

How the Bush Plan Would Cut Corporate Income Taxes: