According to its SEC filings, American Express is holding $8.5 billion in low-tax offshore jurisdictions, including at least 22 offshore subsidiaries in 8 jurisdictions typically identified as “tax havens.” By its own estimates, American Express has avoided paying $2.6 billion in U.S. taxes by holding these profits offshore. To give some perspective, this amount is two and half times the budget of the entire Small Business Administration.[i] 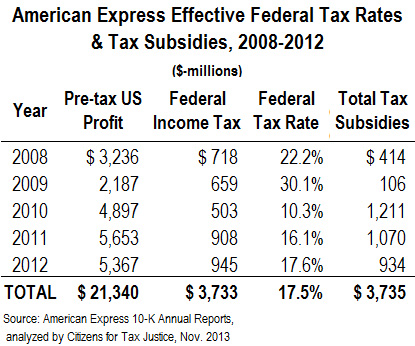 Not satisfied with its current slate of loopholes, American Express is now part of the coalition behind the Campaign for Home Court Advantage,[ii] which advocates sharply expanding offshore loopholes by moving the United States to a territorial tax system.[iii] In contrast, as many as three-quarters of small business owners believe that their small business is harmed when loopholes allow big corporations to avoid taxes.”[iv]

While American Express pretends to support small business this Saturday, remember that the company supports rigging the tax system against those same small businesses they claim to support.

[i] Office of Management and Budget, “The Budget for Fiscal Year 2014, Historical Tables”, http://www.whitehouse.gov/sites/default/files/omb/budget/fy2014/assets/hist.pdf

[iii] Citizens for Tax Justice, “ Fact Sheet: Why Congress Should Reject A Territorial System and a Repatriation Amnesty,” October 9, 2011. http://ctj.org/ctjreports/2011/10/fact_sheet_why_congress_should_reject_a_territorial_system_and_a_repatriation_amnesty.php