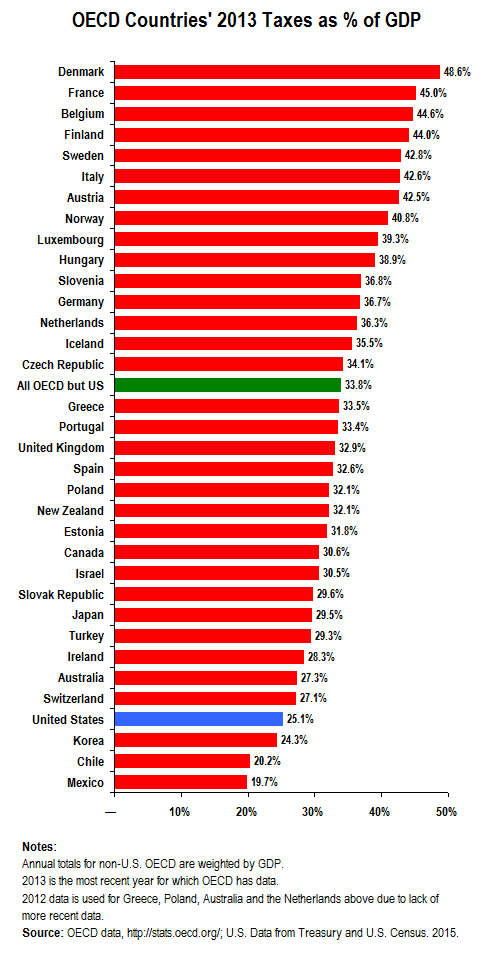 The most recent data from the Organization for Economic Cooperation and Development (OECD) show that the United States is one of the least taxed developed nations.

A tally of all taxes collected at the federal, state and local levels reveals that in 2013 the United States had the fourth lowest level of taxes – 25.1 percent of gross domestic product (GDP) – among the 34 OECD countries. Only Mexico, Chile and Korea collected fewer taxes as a percent of GDP. The level of taxation in the United States is well below the 33.8 percent OECD average.

These facts are important context as federal and state lawmakers consider tax reform plans and weigh how to fund critical priorities from education and public safety to public health and infrastructure. Many anti-tax advocates and their elected allies claim that increasing taxes or even maintaining current rates would make the United States globally uncompetitive. As the OECD data show, the reality is much more complex. Indeed, federal policymakers should consider policies that will allow the nation to remain competitive on a global scale. But such debate must be part of a broader conversation about ensuring the nation, in a fair way, raises enough revenue to ensure it can finance its public priorities as well as programs that enable economic competition, such as strong infrastructure and a robust education system.