Ted Cruz’s Tax Plan Would Cost $13.9 Trillion, While Increasing Taxes on Most Americans

A new Citizens for Tax Justice analysis of presidential candidate Senator Ted Cruz’s tax plan reveals that it would add $13.9 trillion to the national debt over a decade. Despite proposing the largest tax cut of any candidate, Cruz’s tax plan would actually increase taxes on 60 percent of Americans. Cruz’s tax cuts would have to be paired with $13.9 trillion in spending cuts to avoid massive budget deficits, meaning that even eliminating all discretionary spending would not be enough to make up for its cost. This analysis also finds that if Congress chooses to pay for the Cruz plan’s tax cuts with a mix of spending cuts and tax increases, the net impact of the Cruz tax plan would provide an even greater boon to the wealthy and be more detrimental to low- and middle-income taxpayers. 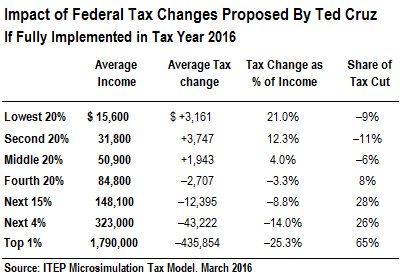 In contrast, the best-off Americans would receive large tax cuts. The top one percent of Americans, a group with incomes averaging nearly $1.8 million in 2016, would enjoy an average annual tax cut of $435,854 under Cruz’s plan.

Nearly two-thirds of Cruz’s proposed tax cuts would go to the top one percent of taxpayers. This regressive pattern reflects the fact that Cruz would eliminate two taxes that fall almost entirely on the best off Americans — the federal estate tax and the corporate income tax — while sharply reducing the progressive personal income tax. Cruz would also offset some of the revenue loss with a highly regressive 18.56 percent value-added tax (a.k.a., a national sales tax). Because middle- and low-income families typically spend most or all of their income each year, while the best-off Americans spend only a fraction of their incomes, any tax on consumption will fall most heavily on those at or below the middle of the income distribution.

Evaluating the Impact of Paying for the Cruz Tax Cuts 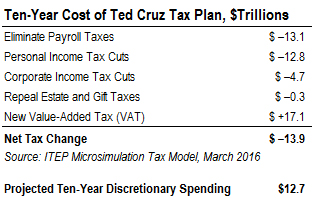 The tax changes proposed by Cruz would, if hypothetically fully implemented in tax year 2016, reduce federal tax collections by $13.9 trillion over the next decade. This includes $30.9 trillion in income, payroll, corporate and estate tax cuts, partially offset by a new value-added tax that would likely raise $17.1 trillion over the next decade. Our analysis shows the impact in 2016 because that is the first year for which Cruz would, as President, likely be able to affect income tax laws.

While candidate Cruz has not specified how he proposes to pay for his tax plan, it is unlikely that spending cuts alone would be sufficient to offset the $13.9 trillion ten-year budget hole the plan would create. The Congressional Budget Office (CBO) estimates that all discretionary spending over the next ten years will total $12.7 trillion. In other words, defense, environmental protection, food safety and the whole host of other discretionary spending programs would have to be entirely eliminated to even come close to paying for the tax plan. 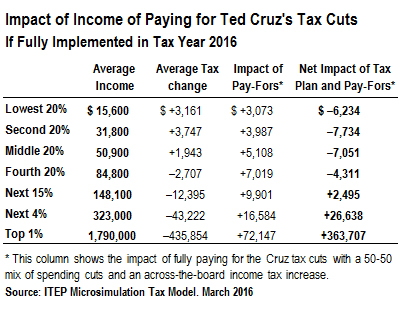 This means that Cruz’s plan would exponentially balloon the national debt or would have to be paid for with a mix of spending cuts and tax increases. This is roughly what happened after the tax cuts pushed through by the Reagan administration in 1981: as it became clear that the tax cuts were unaffordable, Congress significantly cut domestic spending, including Social Security, and increased taxes multiple times.

The table at right shows the net impact of Cruz’s tax plan, for Americans at different income levels, from implementing the plan and then fully offsetting its cost by enacting a mix of “pay fors” composed half of spending cuts and half of across-the-board income tax increases.[1] The spending cuts are allocated across income groups on a per-capita basis, with the same dollar impact on every American adult and child from these cuts.

CTJ’s analysis finds that these pay-fors would be a substantial cost for taxpayers at all income levels, and that low- and middle-income families would be especially hard hit. In particular:

To be clear, the “pay fors” outlined here are hypothetical. Cruz has said he would not seek increases in other taxes to pay for the tax changes he has proposed. If, in keeping with this statement, the Cruz tax cuts were paid for entirely with spending cuts, the net impact on low- and middle-income families of the Cruz plan would likely be an even bigger cost than is shown here.

[1] Citizens for Tax Justice, “The Net Effect: Paying for GOP Tax Plans Would Wipe Out Income Gains for Most Americans,” March 9, 2016. https://ctj.sfo2.digitaloceanspaces.com/pdf/neteffectreport0316.pdf