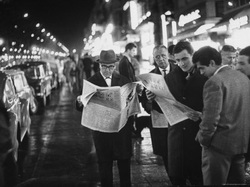 Colorado Governor John Hickenlooper recently announced his support for converting the state’s flat rate income tax into a more progressive, graduated tax with a top rate of 5.9 percent.  This reform would raise $950 million per year for public schools and would make the state’s regressive tax system (PDF) somewhat less unfair.

Georgia is shaping up to be a major tax policy battleground in 2014, and lawmakers appear to be setting their sights on the personal income tax (as state lawmakers are wont to do).  According to the Associated Press, officials are considering either cutting the personal income tax, amending the state constitution to ban any increase in the tax, or simply eliminating the tax entirely.  For some context on why these are all bad ideas, see the Institute on Taxation and Economic Policy’s (ITEP) primer on progressive income taxes (PDF).

Martin Sullivan at Tax Analysts asks whether Virginia drivers actually benefited from the gas tax cut that went into effect earlier this month.  On July 1, gasoline taxes fell in Virginia and rose in North Carolina, but gas prices actually increased in both states alongside crude oil prices.   Moreover, while North Carolina saw the larger price increase, the difference between the two states was just 1.8 cents – which raises the question of where the rest of Virginia’s 6.4 cent tax cut ended up going.  Sullivan concludes that “Virginia drivers [have] good reason to question whether gas tax cuts are primarily for their benefit.”

This week, California reported that tax revenues came in $2.1 billion over expectations during Fiscal Year 2013. The additional revenue – largely stemming from unexpectedly high income tax collections – will be directed to schools through the state’s education funding formula. While the extra revenues are a promising change of pace after years of multibillion-dollar deficits, state officials have warned that the surge might not represent a trend.