President Obama has proposed to limit the tax savings for high-income taxpayers from itemized deductions and certain other deductions and exclusions to 28 cents for each dollar deducted or excluded. This proposal would raise more than half a trillion dollars in revenue over the up­coming decade.[1] Despite this large revenue gain, only 3.6 percent of Americans would receive a tax increase under the plan in 2014, and their average tax increase would equal just less than one percent of their income.

Previously published estimates from Citizens for Tax Justice of this proposal assumed that it would only affect taxpayers with adjusted gross income (AGI) above $250,000 for married couples and above $200,000 for singles.[2] Such an income threshold was included in the version of the proposal that appeared in the President’s jobs bill in 2011, the only actual legislative language for the proposal. However, documents recently released by the administration make clear that there is no longer such an income threshold. This change raises the share of U.S. taxpayers affected by the proposal by about one percentage point.

How the President’s “28 Percent Rule” Would Work 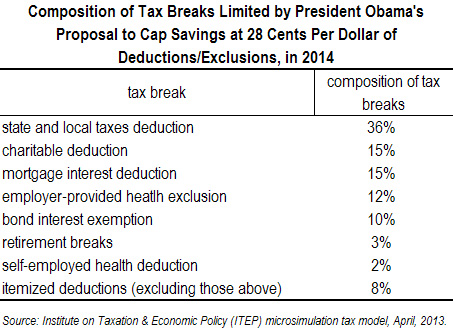 This is an odd way to subsidize activities that Congress favors. If Congress provided such subsidies through direct spending, there would likely be a public outcry over the fact that rich people are subsidized at higher rates than low- and middle-income people. But because these subsidies are provided through the tax code, this fact has largely escaped the public’s attention.

President Obama initially presented his proposal to limit certain tax expenditures in his first budget plan in 2009, and included it in subsequent budget and deficit-reduction plans each year after that. The original proposal applied only to itemized deductions. The President later expanded the proposal to limit the value of certain “above-the-line” deductions (which can be claimed by taxpayers who do not itemize), such as the deduction for health insurance for the self-employed and the deduction for contributions to individual retirement accounts (IRA). [4]

Most recently, the proposal was also expanded to include certain tax exclusions, such as the exclusion for interest on state and local bonds and the exclusion for employer-provided health care. Exclusions provide the same sort of benefit as deductions, the only difference being that they are not counted as part of a taxpayer’s income in the first place (and therefore do not need to be deducted).

Some tax-exempt organizations, particularly universities and museums, have expressed fear that the limitation on the value of the charitable deduction will result in less charitable giving. Research suggests this fear is unfounded.[6] But another point that has received little attention is that amending the President’s proposal to “carve out” the charitable deduction would concentrate the effects of the proposal even more on the deduction for state and local taxes — which is the most justifiable of all the tax breaks the President proposes to limit.

The deduction for state and local taxes paid is sometimes seen as a subsidy for state and local governments because it effectively transfers the cost of some state and local taxes away from the residents who directly pay them and onto the federal government. For example, if a state imposes a higher income tax rate on residents who are in the 39.6 percent federal income tax bracket, that means that each dollar of additional state income taxes could reduce federal income taxes on these high-income residents by almost 40 cents. The state government may thus be more willing to enact the tax increase because its high-income residents will really only pay 60 percent of the tax increase, while the federal government will effectively pay the remaining 39.6 percent. 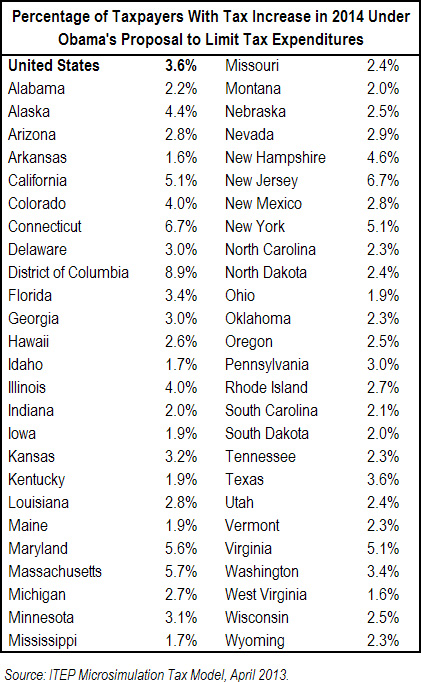 [2] This report replaces the report with those previous estimates, titled “Who Loses Which Tax Breaks Under President Obama’s Proposed Limit on Tax Expenditures?” which was published on March 29, 2013.

[3] Many of the wealthy taxpayers whose deductions and exclusions are targeted by the proposal would also experience a change in their alternative minimum tax (AMT). The AMT is a backstop tax, meaning it forces well-off people who effectively reduce their taxable income with various deductions and exclusions to pay some minimal tax. If a tax change only increases the regular income tax and not the AMT, some taxpayers who currently pay AMT will not be affected at all. Very generally, one of the AMT changes in the proposal essentially ensures that the increase in a taxpayer’s regular income tax would also be applied to the AMT to ensure that the tax increase shows up on the final income tax bill. The other AMT change would limit the savings for each dollar of deductions or exclusions to 28 cents for those whose income is within the “phase-out range” for the exemption that prevents most people from being affected by the AMT. The impacts of these changes are included in the estimates shown here.

[4] The most recent description of the proposal provided by the Obama administration can be found in Department of the Treasury, “General Explanations of the Administration’s Fiscal Year 2014 Revenue Proposals,” April 2013, page 134. http://www.treasury.gov/resource-center/tax-policy/Documents/General-Explanations-FY2014.pdf

[5] For example, see Joseph Cordes, “Effects of Limiting Charitable Deductions on Nonprofit Finances,” presentation given February 28, 2013 at the Urban Institute. Cordes finds that the President’s proposal to limit the tax savings of each dollars of deductions and exclusions to just 28 cents would reduce charitable giving by individuals by between 2.2 percent and 4.1 percent, and the actual loss of total charitable giving would be smaller because some charitable contributions are made by foundations, corporations and other entities rather than individuals affected by this proposal.  http://www.urban.org/taxandcharities/upload/cordesv5.pdf