Read this Report in PDF. 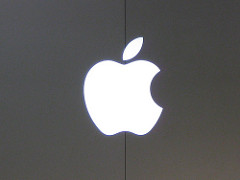 An analysis of Apple Inc.’s financial reports makes clear that Apple has paid almost no income taxes to any country on its $102 billion in offshore cash holdings. That means that this cash hoard reflects profits that were shifted, on paper, out of countries where the profits were actually earned into foreign tax havens.

Under current law, corporations can indefinitely defer paying U.S. income taxes on their offshoreprofits. Multinational corporations with offshore profits sometimes disclose in their financial reports the amount of tax they would pay if there were no “deferral” and their offshore profits were taxable in the United States. But this potential tax rarely amounts to the full 35 percent U.S. corporate tax rate, since these companies typically have already paid some foreign income taxes on these foreign profits when they were earned. Companies are allowed a “foreign tax credit” against their U.S. tax when and if the profits are subject to U.S. tax. So a company that has already paid (for example) a 25 percent tax rate on its unrepatriated offshore income would only pay the difference between that amount and the U.S. corporate tax rate of 35 percent (in this example, 10 percent) when that income is repatriated to the U.S.

The data in Apple’s latest 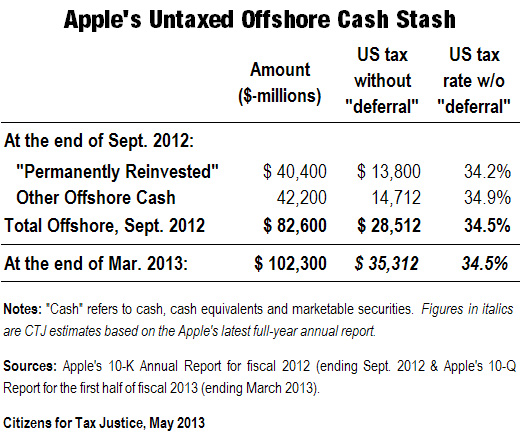 annual report show that the company would pay almost the full 35 percent U.S. tax rate on its offshore income if repatriated. That means that virtually no tax has been paid on those profits to any government.

At the end of March 2013, Apple’s foreign subsidiaries had accumulated $102.3 billion in cash, cash equivalents and marketable securities. Based on more complete information provided in Apple’s latest full annual report, without “deferral” Apple would owe $35 billion in U.S. income taxes on this cash hoard.

Here is what we know from Apple’s 2012 annual report:

Much of Apple’s Offshore Cash Hoard Likely Reflects Profits Shifted from the U.S.

In recent interviews, Apple CEO Tim Cook has denied that any of its cash in tax-haven subsidiaries has been shifted from the U.S., stating that “Apple does not funnel its domestic profits overseas. We don’t do that.”

While it’s virtually impossible to know precisely the source of Apple’s offshore cash, it seems very likely that much, if not most, of it stems from profits that were actually earned in the United States but shifted into tax havens. After all, the primary source of Apple’s profits is the research and design work that it does in the U.S.

But if a larger than expected amount of Apple’s offshore cash was generated by profits shifted into tax havens from foreign countries where Apple does real business, then that provides further proof that the “territorial” tax system used by countries such as the United Kingdom, Germany and so forth make offshore profit-shifting even easier to do than the United States’ “deferral” system.

If Congress simply repealed the rule allowing U.S. corporations to defer U.S. taxes on their offshore profits, there would be no incentive for a company like Apple to claim that its profits are earned in offshore tax havens. The profits would be subject to the U.S. corporate tax no matter where they are generated.

[i] Citizens for Tax Justice, “Why Congress Should Reject A “Territorial” System and a “Repatriation” Amnesty: Both Proposals Would Remove Taxes on Corporations’ Offshore Profits,” October 19, 2011. https://ctj.sfo2.digitaloceanspaces.com/pdf/corporateinternationalfactsheet.pdf