The tax cut proposal circulating among Senate Democrats would provide much larger tax breaks to high-income individuals than President Obama proposes — including an average break of $166,500 for those making over $20 million — because it would extend most of the Bush tax cuts for stock dividends.

Senate Democrats are rumored to be influenced by a report commissioned by the Edison Electric Institute (a lobbying group for corporate utility companies) claiming corporate stocks will be harmed if dividends paid to high-income shareholders are taxed at the same rates as other income, as President Obama proposes. The report claims that even people who would not lose any tax cuts would be harmed because their stocks would be worth less if the richest Americans must pay ordinary income tax rates on their dividends.[1]

The gaping hole in this logic is that two-thirds of stock dividends are not paid to individuals subject to the personal income tax but rather are paid to tax-exempt entities like pension funds.[2] There is no reason why stock prices would be affected by a tax that only applies to one-third of the dividends paid on them. 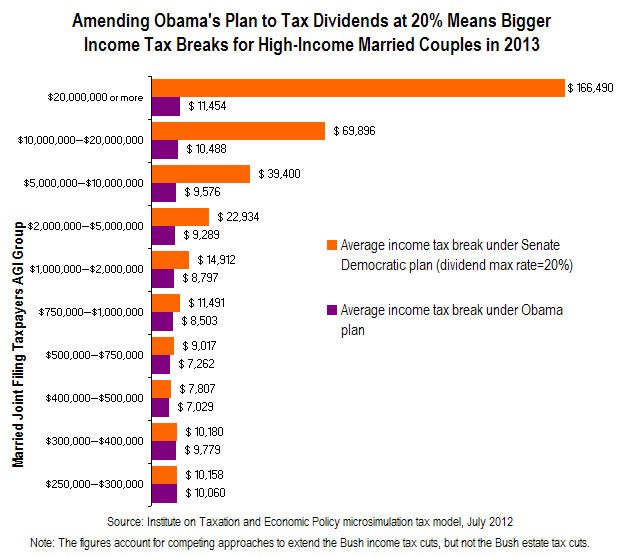 Before the Bush tax cuts were enacted, capital gains income was taxed at preferential income tax rates that did not exceed 20 percent, but corporate stock dividends were taxed just like any other income. Parts of the Bush tax cuts enacted in 2003 further reduced the income tax rates for capital gains (which now do not exceed 15 percent) and applied the same low rates to stock dividends.

Under Obama’s proposal, the top two income tax brackets (where reductions in the rates on “ordinary” income would also be allowed to expire) would be adjusted so that no married couple making less than $250,000, and no single person making less than $200,000 could be affected by them.[3]

News reports indicate that the Senate Democrats are circulating a plan that is the same except that it would tax stock dividends in the top two income tax brackets at a rate of 20 percent.[4] This means the proposal being considered by the Senate Democrats would extend most of the Bush tax cut for dividends even for the richest taxpayers.

[2] According to data from the Bureau of Economic Analysis and our calculations, $1.9 trillion in corporate stock dividends were paid, excluding inter-corporate dividend payments, over the 2004-2008 period (and excluding dividends from non-taxable, “pass-through” S corporations). But the IRS reports that only $0.6 trillion in such corporate stock dividends were reported on individual tax returns (as “qualified” dividends). The remaining corporate stock dividends were not subject to personal income tax, because they were paid to individuals’ accounts with tax-exempt pension plans, other retirement plans, and certain life insurance arrangements. That means that two-thirds of personal dividends from corporate stock are not subject to personal income tax. (See BEA National Income and Product Account Tables 1.16 and 7.10 and the related (albeit somewhat confusing) table accompanying BEA FAQ #318, all at www.bea.gov. See also annual data on Individual Income Tax Returns for 2004–08 from the Internal Revenue Service at www.irs.gov.)

[3] The $250,000 and $200,000 threshold are actually in 2009 dollars (meaning the actual thresholds are somewhat higher than these amounts) and taxpayers with incomes just above these thresholds are not likely to lose much of their tax cuts under President Obama’s proposal. See Citizens for Tax Justice, “Married Couples with Incomes Between $250,000 and $300,000 Would Lose Only 2% of Their Bush Income Tax Cuts under Obama Plan versus GOP Plan,” revised July 16, 2012. https://ctj.sfo2.digitaloceanspaces.com/pdf/obamavsgoptax2012.pdf