A new distributional analysis of Republican Speaker of the House Paul Ryan’s “A Better Way” policies finds that the plan would:

• Add $4 trillion to the national debt over a decade.

• Slash corporate tax collections by at least half.

The so-called “A Better Way” plan would reduce taxes for the top 1 percent of Americans (a group with average annual household income of $1.7 million) by an average of $137,780 per year. This massive tax reduction for the rich equals a 60 percent share of all the individual tax cuts. The top 0.1 percent of Americans would receive $798,000 a year in tax cuts or a 35 percent share of the total tax reductions.

The individual tax cuts are extremely regressive because Ryan’s plan would repeal or sharply reduce two taxes that fall exclusively or mostly on the best-off Americans — the federal estate tax and the corporate income tax — while also slashing personal income taxes on investment income such as capital gains and dividends, which mostly go to the highest earners. 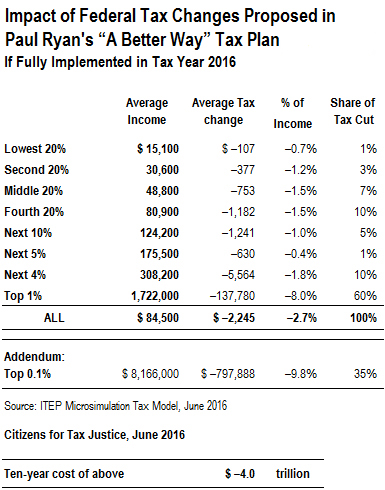 By themselves, the tax cut figures do not show the full regressive effects of the proposed tax changes. Ryan has proposed large reductions in federal programs to offset the cost of the tax reductions. When the impact of these program cuts is considered, only the richest 5 percent of Americans would end up better off. All other income groups would be net losers under the plan. 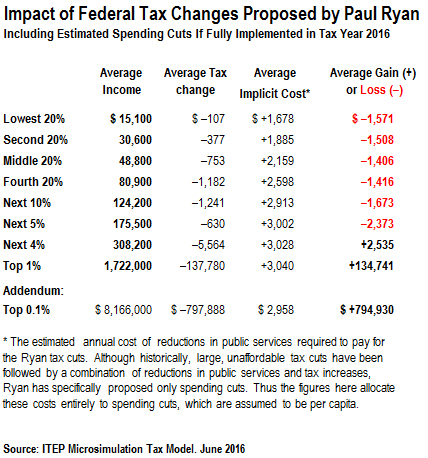 While much of the Ryan tax program is straightforward to analyze, two parts are problematic or unclear.

In making the case for his tariff and rebate proposal, Ryan suggests that his business tax is similar to a value-added tax (a.k.a. a national sales tax). But while there are some similarities, it is decidedly not a VAT. It might better be characterized as a value-added tax with a deduction for value added. That’s because, unlike typical VATs, Ryan’s plan would allow a tax deduction for wages (the source of most value added).

In 2005, a tax panel set up by then-President George W. Bush made a similar proposal but concluded that it was unlikely to pass muster and excluded it from its analysis of its own plan. The panel’s report states: “given the uncertainty over whether border adjustments would be allowable under current trade rules, and the possibility of challenge from our trading partners, the Panel chose not to include any revenue that would be raised through border adjustments.” Most tax experts would agree that the plan would not pass muster.

It’s unclear whether Ryan intends to apply his 20 percent corporate tax to pass-through entities such as sole proprietorships, partnerships and Subchapter S corporations. He never explicitly says he would do so, but he does say that such entities would be required to pay their owner-operators an estimated “reasonable” salary, which would be deductible at the entity level. (This would be somewhat like the current treatment of Subchapter S corporations for payroll tax purposes.) If Ryan’s 20 percent corporate tax rate would apply to the remainder of pass-through income, then the cost of the plan would probably be higher, and the distributional effects would be even more regressive.