Offshore profit shifting by U.S. multinational corporations is estimated to cost the federal government at least $111 billion annually in foregone corporate tax revenue.[1] In March, CTJ reported that Fortune 500 companies are holding $2.4 trillion offshore as “permanently invested” profits.[2] By shifting U.S. profits to foreign subsidiaries and declaring them to be permanently reinvested, corporations can avoid paying U.S. taxes on these earnings indefinitely. A key part of this tax avoidance strategy is shifting profits into subsidiaries in tax haven jurisdictions (countries or territories that have low or zero tax rates, such as Bermuda, the Cayman Islands, and Luxembourg) to minimize or even zero out worldwide income tax liability. Recent data from the Internal Revenue Service show that U.S. corporations report that 59 percent of their foreign income is earned in ten tax havens, even though their reported income in some countries exceeds its entire Gross Domestic Product.[3] This indicates that much of this income is being earned in the United States, but through accounting maneuvers made to appear on paper as though the company earned it in tax haven countries.

Currently, there is no single source that allows the public to see all of a corporation’s subsidiaries and how many of them are located in tax havens. The Securities and Exchange Commission (SEC) requires publicly traded corporations to report all of their “significant” subsidiaries in their annual financial reports. In 2014, 358 Fortune 500 companies disclosed owning at least 7,622 subsidiaries in tax haven countries. [4] However, since companies are permitted to omit subsidiaries that do not meet the SEC’s definition of “significant” (comprising at least 10 percent of the company’s total assets, investments, or income), the true number of tax haven subsidiaries is likely dramatically higher than what is reported. In fact, this report finds that companies may be omitting more than 85 percent of their total and tax haven subsidiaries in their 10-K filings. 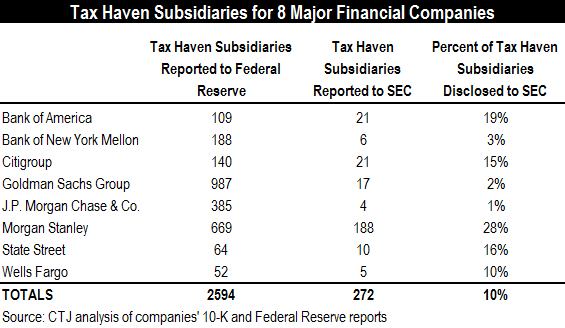 The prominent financial companies in the table above both have large numbers of subsidiaries in tax haven jurisdictions and disclose less than 30 percent of them to the SEC. It is also worth noting that these eight companies that make extensive use of tax havens benefitted from $165 billion in taxpayer-funded bailout funds during the financial crisis.[6]

While the results of our previous Offshore Shell Games study revealed the widespread use of tax haven subsidiaries by Fortune 500 companies, the Federal Reserve data reveal that the subsidiaries listed in the SEC filings are just the tip of the iceberg.

The Need for More Disclosure

Accurate reporting on tax haven subsidiaries and the amount of earnings being held is vital both to investors and to policymakers. According to a recent report from Credit Suisse, numerous major companies (such as Mattel, Xerox and General Electric) may have offshore tax liabilities that constitute more than 10 percent of their total market capitalization.[7] In other words, understanding a company’s offshore tax planning is critical to getting a complete picture of the financial status of many companies.

Now is an opportune time to take action on this issue, as the SEC already has a review process on its disclosure requirements underway.[8] Additionally, it has specifically requested comments on whether it should change the definition of a “significant” subsidiary or require companies to report all subsidiaries. CTJ recommends that the SEC should require the disclosure of all subsidiaries, regardless of size, as well as their location, relationship to the parent company, and unique Legal Entity Identifier (LEI). Such disclosure would give the public and investors alike crucial insights into the offshore finances of our nation’s largest companies. 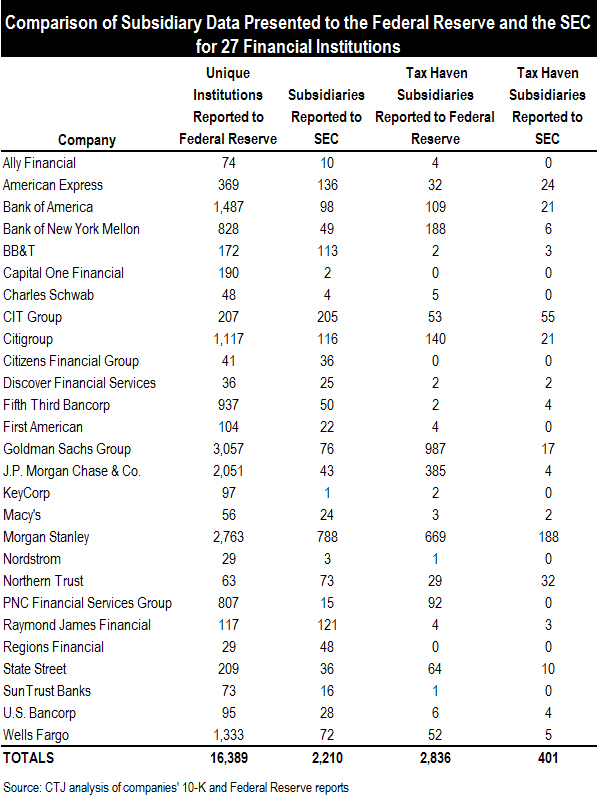 [3] Citizens for Tax Justice, “American Corporations Tell IRS the Majority of Their Offshore Profits are in 10 Tax Havens,” April 7, 2016. http://ctj.org/ctjreports/2016/04/american_corporations_tell_irs_the_majority_of_their_offshore_profits_are_in_10_tax_havens.php#.V21NZtQrKV4