Proposed Expansion of EITC to Childless Workers Would Benefit 10.6 Million Individuals and Families

On March 4, 2015, Senate and House Democrats proposed the “Working Families Tax Relief Act of 2015,” a bill that would improve the Earned Income Tax Credit (EITC) for childless workers. The bill would provide an average annual tax benefit of $604 to 10.6 million low-income working individuals and couples across the United States through boosting the maximum credit and expanding eligibility to more childless workers.

Over its 40 year history, the EITC has become one of the nation’s most significant and effective anti-poverty programs. But historically it has provided little to no benefit to childless workers, including full-time workers earning the minimum wage. In fact, childless workers are the only group that the federal tax system actually taxes deeper into poverty, largely because they do not receive the full benefit of the EITC and aren’t eligible for the Child Tax Credit, another program that boosts low-wage workers’ income.

The Working Families Tax Relief Act would correct this gap by:

Recent proposals by Rep. Paul Ryan and President Obama would also expand the EITC for childless workers, however the maximum credit under their proposals would only be $1,000, compared to $1,400 under the Working Families Tax Relief Act.

Besides expanding the EITC to include childless workers, the Working Families Tax Relief Act of 2015 would make permanent expansions to the EITC and CTC passed as part of the American Recovery and Reinvestment Act (ARRA) in 2009. A separate CTJ analysis shows that maintaining this expansion (set to expire in 2017) would mean 13 million low-income families retain an average annual benefit of $1,073.

The chart below lays out the national and state-by-state impact of the expansion of the EITC to childless workers had it been in effect in 2014: 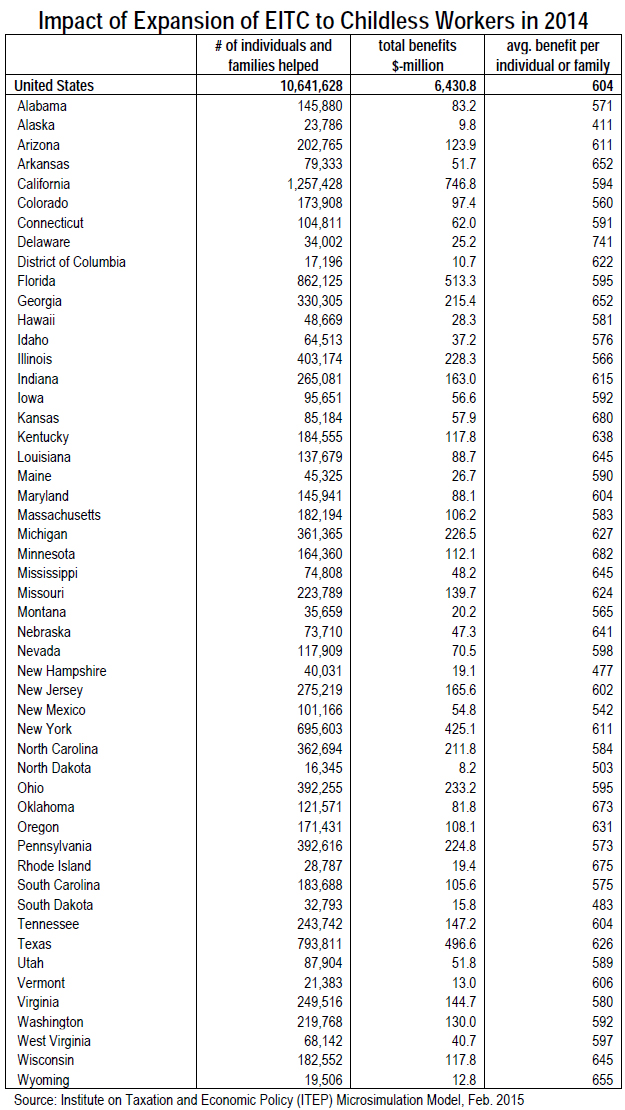