One of the most effective ways in which the American Recovery and Reinvestment Act (ARRA) helped increase economic opportunity was through expansions of the Earned Income Tax Credit (EITC) and the Child Tax Credit (CTC). The temporary improvements to the credits have helped working families get ahead at a time of growing income inequality. Without congressional action, however, the credits’ expansion will expire at the end of 2017.

If the EITC and CTC improvements are allowed to expire, more than 13 million families, including almost 25 million children, would see an average benefit cut of $1,073 per family. Every dollar matters to working families. Congress should make these expansions a permanent part of the U.S. tax code, rather than allowing them to expire or passing a temporary extension.

The ARRA expansion of the Earned Income Tax Credit:

The ARRA expansion of the Child Tax Credit:

The total cost of making these expanded benefits permanent would be just under $14 billion in 2018. While not insignificant, this cost pales in comparison to the $73 billion cost in 2018 of a group of business tax breaks, known as the tax extenders that Congress is poised to extend or make permanent. At a time of growing income inequality, lawmakers’ priority should be helping working families get ahead, not giving businesses tens of billions in additional tax breaks.

The charts below lay out the national and state-by-state impact of the expansion of the EITC and CTC in 2018: 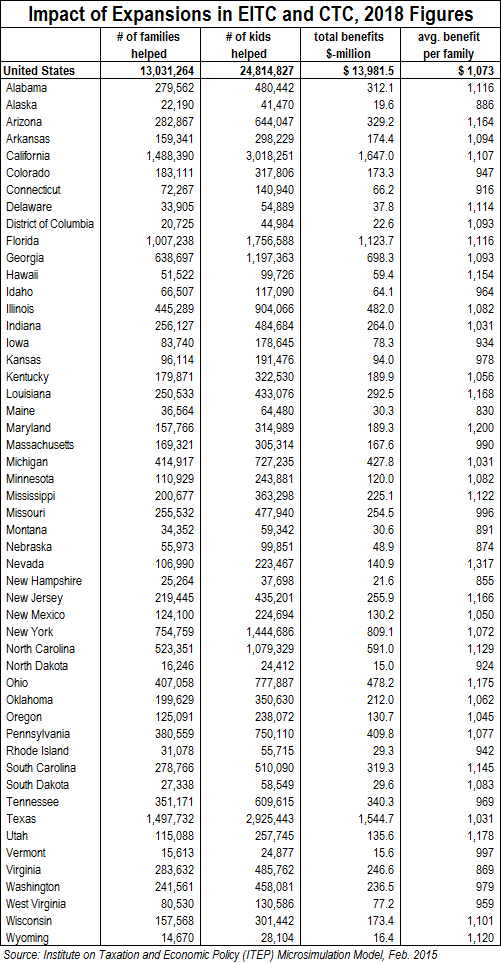