New Tax Laws in Effect in 2013 Have Modest Progressive Impact

The deal approved by Congress on New Years Day to address the “fiscal cliff” does not require the richest Americans to pay a disproportionate share of taxes, despite common claims that it does. As the graph and table below illustrate, the deal resulted in a tax system that is modestly more progressive than the one we would have if Congress had simply extended all of the tax laws in effect in 2012.

Taxes have gone up slightly for all income groups because of the expiration of the payroll tax holiday (which was quietly accepted by most lawmakers of both political parties), as well as the expiration of some Bush-era tax cuts for the rich and a previously enacted health-care-related tax on the rich that took effect this year.

The graph and table that follow compare the taxes that Americans in different income groups will or would pay in 2013 under two scenarios. The first reflects the laws now in effect. The second is what Americans would be paying if all of the Bush-era tax cuts had been extended, the 2012 payroll tax cut had also been extended, and the increase in the Medicare Hospital Insurance (HI) on high-income people had not gone into effect. 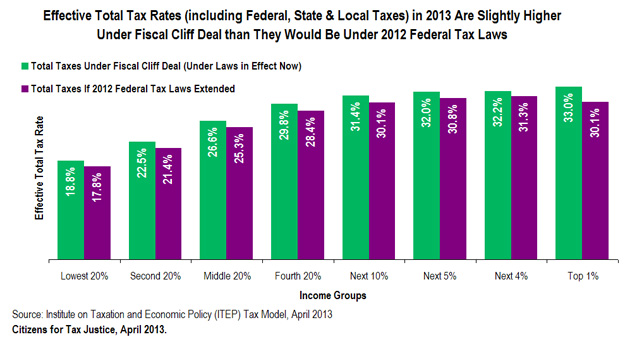 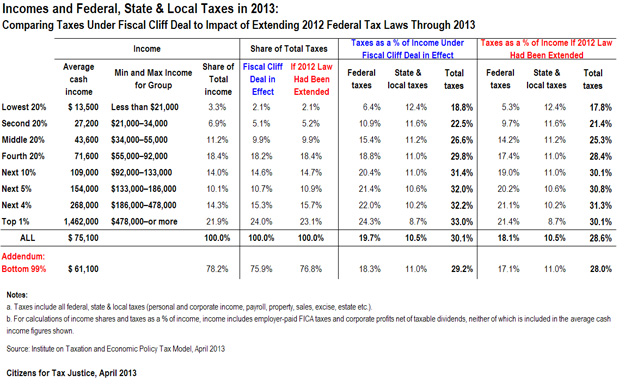 In other words, the richest one percent of Americans are not paying a disproportionate share of taxes, and the tax changes that took effect this year did not make a dramatic difference.

Taxes that Have Changed in 2013

■ Personal income tax rates and limits on exemptions and deductions.
Under the fiscal cliff deal, two parts of the personal income tax cuts originally enacted under President George W. Bush were allowed to partially expire for the rich. The first is the reduction in the top income tax rate from 39.6 percent to 35 percent. The rate was allowed to revert back to 39.6 percent for married couples with taxable income greater than $450,000 and singles with taxable income greater than $400,000. The second is the personal exemption phase-out and the limitation on itemized deductions (often called “PEP and Pease”) which were allowed to come back into effect for married couples with adjusted gross income (AGI) greater than $300,000 and singles with AGI greater than $250,000.

Before 2013, the HI tax was a 2.9 percent tax on earnings. (Technically employed people directly pay half the tax while their employer directly pays the other half, but economists agree that the worker ultimately bears even the latter half of the tax in the form of reduced wages and benefits.)

One increase in the HI tax is the introduction of a higher rate (3.8 percent) for earnings above $250,000 for a married couple and above $200,000 for a single person (in other words, an additional 0.9 percent tax on earnings above these levels). The other increase allows the HI tax to apply to most types of investment income (which had been exempt from the HI tax until now) besides retirement income. This part of the tax is a 3.8 percent tax on investment income to the extent that it makes up a taxpayer’s AGI in excess of $250,000 for a married couple or $200,000 for a single person.

■ Social Security payroll taxes.
The Social Security payroll tax is normally 12.4 percent of earnings, up to a cap that is adjusted for wage growth each year. (This year the tax applies to a worker’s earnings up to $113,700.) Half the tax is paid directly by employees while the other half is paid directly by employers. (Again, economists agree that even the latter half of the tax is ultimately borne by employees.) The tax takes up a larger percentage of income for the typical low- or middle-income worker than it does for a high-income person because of the wage cap and also because high-income people are more likely to receive a portion of their income in the form of investment income, which is not subject to this tax.

In 2012, a payroll tax “holiday” was in effect which reduced the Social Security tax to 10.4 percent. (Technically, the part of the tax paid directly by employees was reduced from 6.2 percent to 4.2 percent.) The fiscal cliff deal did not extend the payroll tax holiday, meaning the tax rate reverted to 12.4 percent in 2013.

Why Have Some Observers and News Reports Claimed that the Poor Pay Little or Nothing While the Rich Pay a Disproportionate Share of Taxes?

Some political commentators and some major media outlets have reported that low- and middle-income Americans pay little or no taxes while the rich pay a hugely disproportionate share of taxes, and that this is especially the case in 2013 as a result of the fiscal cliff deal.

Sometimes this misconception occurs because people erroneously focus only on the federal personal income tax, which is the most progressive major tax we have. In other instances, thoughtful people do look at all of the federal taxes Americans pay, but ignore state and local taxes and measure income in a way that is incomplete. The next two sections address each of these sources of confusion.

The Federal Personal Income Tax Is Progressive, But Most Other Taxes that Americans Pay Are Regressive

In April 2009, estimates released by the Urban-Brookings Tax Policy Center (TPC) created a tsunami of misunderstanding that raged for years and finally crested during the presidential campaign of Mitt Romney in 2012. The figures released by TPC in 2009 showed that nearly 43.4 percent of Americans would have “zero or negative tax liability” that year.[1]

Close examination of the table containing the figures made clear that TPC had estimated 43.4 percent of Americans would not pay federal personal income taxes that year. It was certainly not saying that this group would not pay other federal taxes or state and local taxes.

But that was largely lost in the months that followed. A news article about the figures quoted a TPC senior fellow saying, “You’ve got a larger and larger share of people paying less and less for the services provided by the federal government. The concern is that the majority can say, ‘Let’s have more benefits, spend more,’ if they’re not paying for it. It’s ‘free.’ That’s not a good thing to have.”[2]

A TPC update in June of that year increased its estimate to 46.9 percent — nearly 47 percent of Americans.[3]

Flash forward to the presidential campaign trail in 2012, where Mitt Romney famously told a room full of donors, during what he believed to be an off-record event,

For several years, Citizens for Tax Justice has estimated the total federal, state and local taxes paid by Americans in each income group. We’ve found that no one group is getting a free-ride and that the tax system overall is just barely progressive. For example, the table above shows that the poorest fifth of Americans (the “lowest 20%”) will pay 2.1 percent of the total (federal, state and local) taxes in America in 2013. The table also shows that this same group will only receive 3.3 percent of the total income in the country this year. So the poorest fifth of Americans do pay a share of taxes that is lower than their share of total income, but not dramatically lower.

The table also shows that the tax changes that took effect this year did not dramatically alter this distribution of America’s taxes.

There is no comprehensive source for estimates of state and local taxes other than those generated by CTJ’s partner organization, the Institute on Taxation and Economic Policy (ITEP). The figures in this report and the accompanying fact sheet, which incorporate state and local tax estimates from ITEP, are therefore the only real estimates of the total taxes paid in America.

Disagreements about measuring income in America today are not as dramatic as in this example, but they nonetheless lead to different estimates of effective federal tax rates.

Specifically, some analysts assume that the income reported by high-income taxpayers to the IRS is essentially equal to all of the income that these taxpayers have. However, many kinds of income are not included in federal adjusted gross income, but are nonetheless real income.

In estimating taxpayers’ income, ITEP begins with the adjusted gross income (AGI) reported by taxpayers to the IRS and then adds sources of income that are not included in AGI. For the bottom three-fifths of Americans this additional income primarily reflects untaxed transfers, most notably non-taxable Social Security benefits. In the top income group (the top one percent), the additional income primarily reflects ITEP’s conservative estimates of unreported and unrealized capital gains and understated business income.

For the income groups in between, additional income includes the above items, but the difference is much smaller than it is in the lower and top income groups, because wages subject to withholding dominate the total income of taxpayers in these in-between groups.

This definition of income is one that most people understand. For example, Social Security recipients know that they receive Social Security benefits even if some or all of those benefits are not taxable. Likewise, high-income investors know that the capital gains they report on their tax returns are generally considerably less than the capital gains they actually enjoy. This means that people can look at ITEP’s estimates for different income groups and easily identify which income group they fall into.

One final note: Effective tax rates are calculated as taxes divided by income. The income definition that ITEP uses to calculate effective tax rates when all taxes are included in the analysis is the definition of income just described, plus two adjustments to account for sources of income recognized by all economists (even if not entirely understood by most people trying to determine which income group they belong to).

[5] Economists generally agree that the part of the payroll tax that is paid directly by employers is a portion of the employee’s income that would have been paid to the employee (in the form of higher wages or benefits) but is instead paid to the federal government as taxes.

[6] Some analysts do not attribute pretax corporate profits to investors, even though they do count corporate income taxes as ultimately paid by investors in computing effective tax rates. These analysts assume that all corporate profits eventually show up in individuals’ incomes, either as taxable dividends (which we do subtract from pretax corporate profits) or taxable capital gains. We believe that this assumption is unwarranted. since most individual capital gains show up either in retirement benefits, on which the effective individual tax rate is zero or less or are never realized or reported (in part due to the rule that exempts capital gains on inherited assets from tax forever). Contributions to retirement funds (pensions, 401k’s, etc.) are not taxable as earnings when the contributions are made, thus avoiding both income and payroll taxes. Distributions during retirement are taxable. But, assuming a constant tax rate, this is the mathematical equivalent of taxing the contributions when made and exempting the distributions from tax. (This is why analysts treat tax-deductible IRA contributions as the equivalent of “Roth IRAs,” where the contributions are not deductible, but the distributions are tax-exempt.) In fact, since tax rates on retirement distributions from pensions, 401k’s, etc. are likely to be taxed at a lower tax rate than the tax rate avoided by the tax exemption for contributions, the actual tax rate on retirement income is likely to be negative.