Mitt Romney’s Tax Plan Would Give Average Tax Break of at Least $250,000 to People Making Over $1 Million

(Read the PDF version of this fact sheet)

Presidential candidate Mitt Romney proposes to make permanent all the Bush tax cuts, slash income tax rates by a fifth, enact several other new tax breaks, and eliminate or reduce tax expenditures — which are left unspecified — to offset the costs of the tax cuts (other than the Bush tax cuts, which would be deficit-financed). For the richest Americans, the value of the tax cuts would be much larger than the tax expenditures they might have to give up.

For example, taxpayers making over $1 million in 2013 would receive a net tax cut of a little more than $250,000, on average, under Romney’s plan even if they had to give up all of their tax deductions and tax credits and the exclusion from income of the generous health benefits they receive.

These figures assume that wealthy taxpayers would have to give up all of their tax expenditures — except the many breaks for investing and saving, which Romney has made clear he would keep. The very tax breaks for investing and saving that Romney has pledged to retain, particularly the lower tax rates for capital gains and stock dividends, provide the greatest benefits to the richest taxpayers. 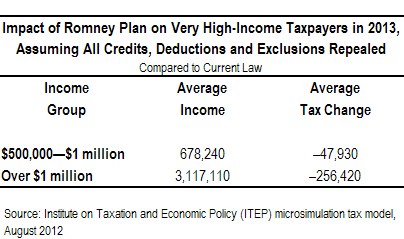 As a result, it would be impossible for Romney to keep all of the promises he has made — extend the Bush tax cuts, slash income tax rates by a fifth, enact additional breaks, make up the revenue but retain breaks for investment income — without giving a windfall to very high-income people.

The tax break for very high-income Americans under Romney’s plan could be even larger than this. For example, if the plan was enacted, it might not eliminate all tax expenditures for the wealthy, which would be politically very difficult to accomplish. Also, the Romney plan includes a steep reduction in the corporate income tax. It is unclear whether or not the corporate tax rate reduction would be offset by provisions to close corporate tax loopholes. If not, then the owners of corporate stock (which is concentrated in the hands of the richest Americans) would further benefit.

If Romney kept his pledge to avoid increasing the deficit (aside from the enormous deficit increase resulting from the Bush tax cuts), then someone will have to face a net increase in their taxes. These figures demonstrate that the very rich won’t be the ones paying for Romney’s proposals.

The estimates used to calculate the figures in the table above assume that the Romney plan would:

-Make permanent the Bush income tax cuts for all income levels.
-Further reduce all income tax rates by a fifth.
-Repeal the Alternative Minimum Tax.
-Repeal the estate and gift tax.
-Exempt up to $200,000 of long-term capital gains, dividends and interest from taxable income for taxpayers who do not have $200,000 of other income.
-Maintain 15% rates for capital gains and dividends.
-Repeal all itemized deductions (all taxpayers take standard deduction).
-Repeal all tax credits.
-Repeal exclusion for employer-provided health care.
-Repeal deduction for health insurance for the self-employed.
-Repeal the Hospital Insurance tax increase on the wealthy that was enacted as part of health care reform.