How Big Is the Romney-Ryan Tax Cut for Millionaires?

Romney and Ryan Both Propose Plans that Would Give Millionaires Average Breaks of at Least $250,000, and Possibly as High as $400,000

Read the PDF version of this report.

Both candidates also say that they would reduce or eliminate many “tax expenditures” (deductions, credits, exclusions and loopholes) so that their plans would cost no more than making all the Bush tax cuts permanent would cost. That’s hard to believe because neither has specified a single tax expenditure they would target. But one thing is clear: for the richest Americans, the rate reductions and other breaks would be far more valuable than any tax expenditures they could lose under either plan. (The details of the Romney and Ryan tax plans are in the appendix.)

Both Romney and Ryan’s plans would give people making over $1 million an average tax cut of about $250,000 if these millionaires had to give up all of their tax expenditures. If Romney or Ryan’s plan was implemented without closing any tax expenditures for the rich, then people making over $1 million would receive an average tax cut of around $400,000.

The estimates of the maximum average tax breaks, on the other hand, assume that no tax expenditures are eliminated or reduced.

In addition to the personal income tax breaks, both sets of estimates include the plans’ estate tax breaks and the break that would result from the repeal of the increase in Hospital Insurance taxes for high-income individuals. (The Hospital Insurance tax increase was enacted as part of health care reform, which both Romney and Ryan would repeal.) The estimates of the maximum average tax cuts (which assume that none of the proposed rate reductions or other breaks are offset by limiting tax expenditures) also include the corporate income tax cuts. Cutting the corporate income tax benefits the owners of corporate stock and business assets, about half of which are concentrated in the hands of the richest one percent of taxpayers.

Romney’s plan is more generous to the rich in some ways, while Ryan’s plan is more generous to the rich in other ways. For example, Romney’s plan includes a total repeal of the estate tax, which is not included in Ryan’s plan. (We assume that Ryan’s pledge to make permanent the Bush tax cuts includes making permanent the provision in effect now that eliminates most, but not all, of the estate tax.) On the other hand, the top personal income tax rate on “ordinary” income would be 25 percent under Ryan’s plan but 28 percent under Romney’s plan. In the end, both plans offer tax breaks of about the same size to those with incomes exceeding $1 million.

1. A previous CTJ analysis of Rep. Ryan’s most recent budget plan found that it would provide people making over $1 million with average personal income tax cuts of at least $187,000. This previous report focused only on personal income tax cuts, not cuts in other types of taxes such as the estate tax, Hospital Insurance tax, and corporate tax. See Citizens for Tax Justice, “Ryan Budget Plan Would Cut Income Taxes for Millionaires by at Least $187,000 Annually and Facilitate Corporate Tax Avoidance,” March 22, 2012. https://ctj.sfo2.digitaloceanspaces.com/pdf/ryanplan.pdf

2. A previous version of Rep. Ryan’s plan analyzed by CTJ would have allowed individuals (like Mitt Romney) who live on investment income to essentially pay no personal income taxes, while at the same time imposing a “value-added” tax (VAT) that would result in tax increases for low- and middle-income Americans. See Citizens for Tax Justice, “Rep. Ryan’s House GOP Budget Plan: Federal Government Would Collect $2 Trillion Less Over a Decade and Yet Require Bottom 90 Percent to Pay Higher Taxes,” March 9, 2010. https://ctj.sfo2.digitaloceanspaces.com/pdf/ryanplan2010.pdf 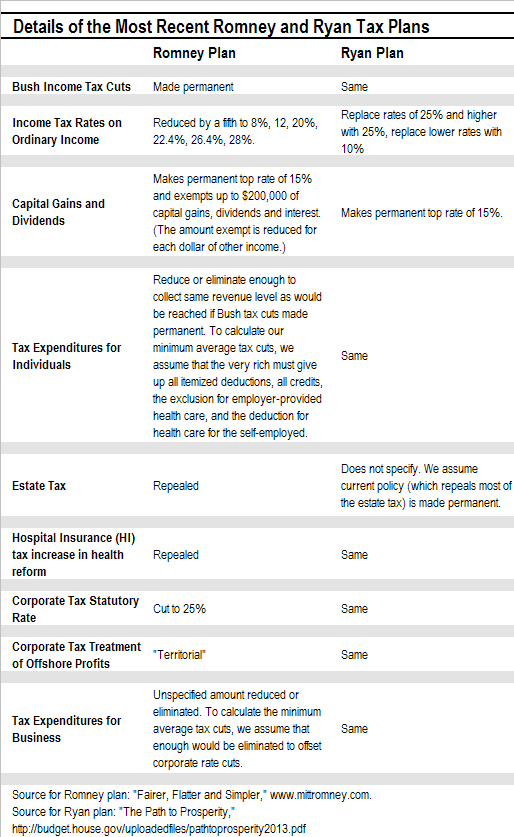