Fact Sheet: Proposals for Extending Bush Tax Cuts for Another Year Would Cost Upwards of $240 Billion

Read the PDF version of this fact sheet.

Preliminary estimates by Citizens for Tax Justice (CTJ) predict that President Obama’s proposal today to extend for an additional year the Bush income tax cuts for the first $250,000 in income for couples and the first $200,000 of income for singles, along with extension of most of the Bush estate tax cut, would reduce federal revenues by $243 billion.

Other plans would cost even more. 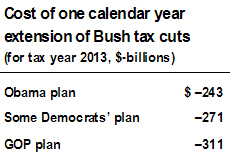 A proposal by some congressional Democrats to extend the Bush income tax cuts for the first $1 million in income (both for married and unmarried taxpayers) would push the one-year revenue loss to $271 billion.

Congressional Republicans favor extension of all the Bush income tax cuts, along with almost all of the Bush estate tax cut. That plan would reduce revenues by $311 billion.

These figures do not include the additional interest on the national debt that would result from extending the tax cuts.

These estimates are based on data from the Office of Management and Budget and the Congressional Budget Office and calculations by Citizens for Tax Justice. Official estimates from the congressional Joint Committee on Taxation are expected to be similar, depending on the exact details of the various plans.

For more details on how the President’s approach compares to the Congressional GOP approach, and for state-by-state figures, visit http://www.ctj.org/bushtaxcuts2012.php.