Read this report in PDF 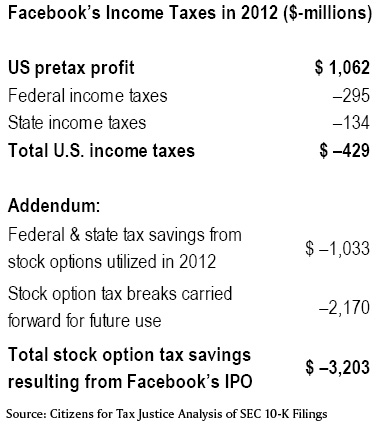 Earlier this month, the Facebook Inc. released its first “10-K” annual financial report since going public last year. Hidden in the report’s footnotes is an amazing admission: despite $1.1 billion in U.S. profits in 2012, Facebook did not pay even a dime in federal and state income taxes.

Facebook’s income tax refunds stem from the company’s use of a single tax break, the tax deductibility of executive stock options. That tax break reduced Facebook’s federal and state income taxes by $1,033 million in 2012, including refunds of earlier years’ taxes of $451 million.[1]

But that’s not all of the stock-option tax breaks that Facebook generated from its initial public offering of stock (IPO). Facebook is also carrying forward another $2.17 billion in additional tax-option tax breaks for use in future years.[2]

So in total Facebook’s current and future tax reductions from the stock options exercised in connection with its IPO will total $3.2 billion. That’s almost exactly what CTJ predicted last year, when Facebook first announced its IPO.[3]

Of course, Facebook is not the only corporation that benefits from stock option tax breaks.

Many big corpora­tions give their executives (and sometimes other employees) options to buy the company’s stock at a favorable price in the future. When those options are exercised, corporations can take a tax deduction for the difference between what the employees pay for the stock and what it’s worth (while employees report this difference as taxable wages). Before 2006, companies could not only deduct the “cost” of the stock options on their tax returns, reducing their taxable profits as reported to the IRS, but they also didn’t have to reduce the profits they reported to their shareholders in the same way, creating a big gap between “book” and “tax” income.

Some observers, including CTJ, have argued that the most sensible way to resolve this incongruity would be to deny companies any tax or “book” deduction for an alleged “cost” that doesn’t require a dime of cash outlay.[4] But instead, rules in place since 2006 now require companies to lower their “book” profits to take some account of options. But the book write-offs are still usually considerably less than what the companies take as tax deductions. That’s because the oddly-designed rules require the value of the stock options for book purposes to be calculated — or guessed at — when the options are issued, while the tax deductions reflect the actual value when the options are exercised. Because companies typically low-ball the estimated values, they usually end up with bigger tax deductions than they deduct from the profits they report to shareholders.

A November 2011 CTJ report assessing the taxes paid by the Fortune 500 corporations that were consistently profitable from 2008 through 2010 identified this stock option tax break as a major factor explaining the low effective tax rates paid by many of the biggest Fortune 500 companies.[5]

Some members of Congress have recently taken aim at this remaining tax break. In July of 2011, Senator Carl Levin (D-MI) introduced the “Ending Excess Executive Corporate Deductions for Stock Options Act,” to require companies to treat stock options the same for both book and tax purposes. Levin has signaled his intention to introduce similar legislation in early 2013. According to calculations made by Levin’s staff using IRS data, in the past five years U.S. companies have consistently deducted far more stock options for tax purposes than they recorded as a book expense. This “excess” deduction, according to Levin’s calculations, has ranged between $12 billion and $61 billion a year.

[1] “The tax benefits realized from share-based award activity of $1.03 billion related to both the reduction of current year income tax liabilities and the expected refund of $451 million from income tax loss carrrybacks to 2010 and 2011.” Facebook Inc. 10-K for 2012, p. 84.

[2] Facebook’s disclosure of this huge carryforward of stock option tax breaks is cryptic, but clear to those of us who are familiar with corporate annual reports: “As of December 31, 2012, the U.S. federal and state net operating loss carryforwards were approximately $5.83 billion and $7.62 billion, which will expire in 2027 and 2021, respectively, if not utilized. If realized, $2.17 billion of net operating loss carryforwards will be recognized as a benefit through additional paid in capital.” (emphasis added.) Facebook Inc. 10-K for 2012, p. 85.