Apple, Microsoft and Eight Other Corporations Each Increased Their Offshore Profit Holdings by $5 Billion or More in 2012

Read this report in PDF 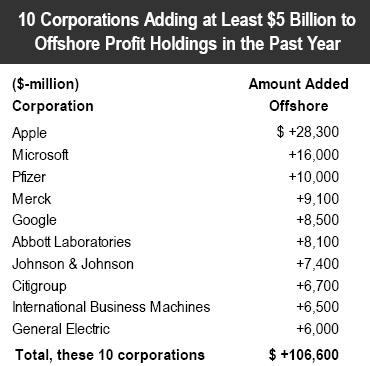 multinational U.S.-based corporations have systematically accumulated staggering amounts of profits offshore. Much if not most of these profits were actually earned in the United States but have been artificially shifted to foreign tax havens to avoid U.S. corporate income taxes.

Under current law, so-called “foreign” corporate profits are not subject to U.S. tax unless and until the profits are repatriated into the United States. According to the congressional Joint Committee on Taxation, this indefinite deferral of tax on profits ostensibly earned or shifted overseas will cost the federal government about $600 billion over the upcoming decade.3

But lobbyists for the multinationals are urging Congress to go even further, by permanently exempting from U.S. corporate income taxes all profits that U.S. corporations manage to have treated as “foreign.” Such a change would make it even more profitable for multinational corporations to shift jobs and profits out of the United States, and could cost the U.S. government hundreds of billions of dollars in additional lost revenues.

Over the Past Four Years, 48 Corporations Added $518 Billion to their Offshore Profit Hoards

Showing that 2012 is not an exception, over the past four years, 48 corporations each added at least $3 billion to their offshore profit hoards. The total that these 48 companies added over four years was $518 billion.

Some companies, of course, had even higher additions to their offshore profit hoards over the past four years. Apple Inc. topped the four-year list, adding $65 billion to its offshore holdings of cash and marketable securities. Fourteen other corporations also added at least $10 billion to their offshore profit holdings over the last four years. These were: Microsoft, Pfizer, General Electric, Merck, Google, Abbott Laboratories, IBM, Cisco Systems, Hewlett-Packard,4 Johnson & Johnson, Citigroup, Procter & Gamble, Oracle and PepsiCo. (See table on p. 6. of PDF)

Offshoring is Much More Widespread

The offshoring phenomenon goes well beyond the group of companies just highlighted. A December 2012 CTJ report shows that almost 300 Fortune 500 corporations have disclosed holding at least some profits overseas, and that these companies collectively held over $1.6 trillion offshore at the end of 2011.5

Of this group, 47 corporations indirectly disclosed how much U.S. tax they would owe if their $384 billion in offshore profit holdings were subject to U.S. corporate income tax. Just for these companies, the taxes due would total $105 billion. These figures strongly indicate that most of those profits have been shifted out of the U.S. into foreign tax havens where the companies do no actual business.6

Michigan Senator Carl Levin recently observed that such practices may be legal, but they shouldn’t be; ending the practice of deferral would render artificial profit shifting illegal and would restore significant revenues to the U.S. Treasury.
————————————————————————————————————–

1 A recent Senate Permanent Subcommittee on Investigations hearing revealed that Microsoft shifted 47 percent of the profits earned on products developed and sold in the U.S. to subsidiaries in foreign tax havens. http://www.hsgac.senate.gov/subcommittees/investigations/media/subcommittee-hearing-to-examine_billions-ofdollars-in-us-tax-avoidance-by-multinational-corporations-

2 Google, Starbucks, and Amazon were recently called before a U.K. Parliament committee to answer charges that they were dodging U.K. taxes by artificially shifting profits to tax haven countries. See Rajeev Syal and Patrick Wintour, “MPs attack Amazon, Google and Starbucks over tax avoidance,” The Guardian, December 2, 2012 available at http://www.guardian.co.uk/business/2012/dec/03/amazon-google-starbucks-tax-avoidance.

3 See Joint Committee on Taxation, Estimates of Federal Tax Expenditures for Fiscal Years 2012-2017, Feb. 1, 2013 (JCS-1-13), page 30. The JCT report estimates that “deferral of active income of controlled foreign corporations” will cost $265.7 billion over the 2013-17 period. Extrapolating out the following five years brings the 10-year cost to more than $600 billion. https://www.jct.gov/publications.html?func=startdown&id=4503

4 Hewlett-Packard was also the target of a recent Senate Permanent Subcommittee on Investigations probe. See http://www.hsgac.senate.gov/subcommittees/investigations/media/subcommittee-hearing-to-examine_billions-ofdollars-in-us-tax-avoidance-by-multinational-corporations-.

6 Eli Lilly, for example, reported that it would owe the full 35 percent U.S. corporate tax if it “repatriated” all of the $20.6 billion it had parked overseas at the end of 2011. But since the U.S. gives a credit for any income taxes paid to foreign governments that means that Eli Lilly has paid no income tax to any government on its offshore income. Which, in turn, means that the profits must have been artificially shifted from where they were actually earned into tax-free havens. Overall, the 47 corporations that disclosed what they would owe if they repatriated their offshore profits said that they would pay a U.S. tax of 27 percent. That implies that more than three-quarters of the profits (27%/35%) have never been taxed by any government. See Citizens for Tax Justice, “Which Fortune 500 Companies Are Sheltering Income in Overseas Tax Havens,” Oct. 17, 2012. http://ctj.org/ctjreports/2012/10/which_fortune_500_companies_are_sheltering_income_in_overseas_tax_havens.php