Despite Claim of High Tax Rate, Continental Resources Paid Just 2.2% of Its Profits in Federal Income Taxes over the Past 5 Years

Continental Resources, an American oil company that is particularly active in North Dakota and Montana, has enjoyed pre-tax U.S. profits of $1,872 million over the past five years, but paid a mere $40 million in federal corporate income taxes over that same period. Continental Resources has enjoyed an effective federal corporate income tax rate of just 2.2 percent over the past five years.

These figures are taken directly 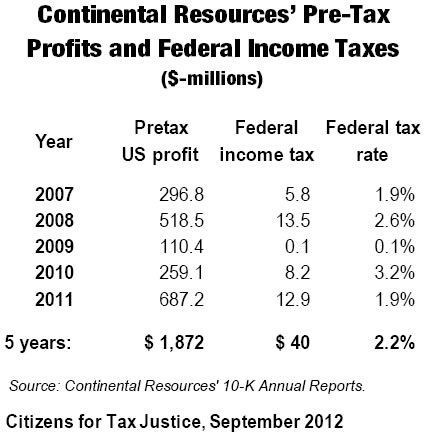 from the company’s public filings with the Securities and Exchange Commission (SEC).

What makes this particularly noteworthy is that Harold Hamm, Continental Resources’ Chairman and CEO, as well as Mitt Romney’s top energy advisor, has submitted testimony to the House Energy and Commerce Committee in which he claims that his company’s effective corporate income tax rate is 38 percent.1 This figure does not reflect reality.

The figures from his company’s SEC filings make it clear that Hamm’s 38 percent calculation includes both “current” taxes, which are the taxes actually paid each year by the company, and “deferred” taxes, which are taxes the company has not paid, but might pay at some point in the future.

Any deferred income taxes that are actually paid will be reported as “current” taxes in the year that they are paid. At that point (if ever), CTJ will automatically include them in its calculation of the company’s effective corporate income tax rate.

This ridiculously low effective income tax rate was not unique to 2011. In fact, Continental Resources paid just $40 million, or 2.2 percent of its profits, in “current” federal income taxes over the 2007-2011 period.2

2 Companies sometimes point to their “cash income taxes paid,” which is a figure in their public filings that some argue is closer to what companies actually pay in income taxes in a given year. Over the past five years, Continental Resources’s “cash income tax paid” have been essentially identical to its “current” tax figures.