A new analysis by Citizens for Tax Justice of presidential candidate Bernie Sanders’ recently released “Medicare for All” tax plan finds that Sanders’ health-related taxes would raise an estimated $13 trillion over 10 years. The analysis also finds that the plan would raise average after-tax incomes for all but the top income groups. 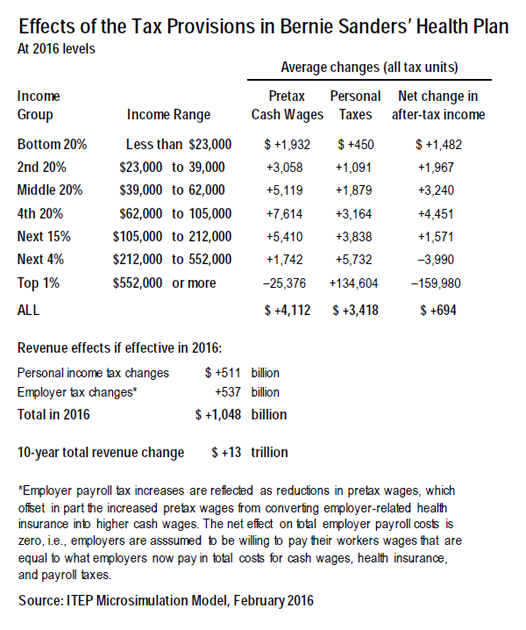 The reason that Sanders’ plan increases average after-tax incomes for all but the highest-income groups, even as it substantially increases tax revenues, is that the plan would replace employer-provided healthcare with universal health insurance for all Americans. Thus, workers would get comprehensive health insurance in addition to higher wages. (This is far different from proposals to simply make some or all of currently tax-exempt employer-provided insurance subject to income and payroll taxes, which would be a very bad deal for workers.)

Wages would go up, under the assumption that employers will maintain the total amount per worker that they now pay in cash wages, health benefits, and employer payroll taxes. Thus, ITEP’s estimate of the net increase in cash wages reflects both decreased employer costs from eliminating employer-related health insurance and increased employer costs from higher employer payroll taxes (both from Sanders’ proposed new 6.2 percent employer tax and changes in existing payroll taxes due to wage increases). As a result, on average just over half of the employer savings from eliminating health insurance costs would be reflected in higher wages.

In addition to his new 6.2 percent employer payroll tax, Sanders’ health-related tax proposals include several highly progressive tax changes. Most notably, it would end the preferential low tax rates on capital gains and dividends, on incomes over $250,000 and apply higher marginal income tax rates on top earners. Because of these progressive tax increases, ITEP’s analysis found that the top one percent would see their average after-tax income go down by $159,980 under Sanders’ plan.

CTJ’s full analysis can be found here (PDF): The Tax (and Wage) Implications of Bernie Sanders’“Medicare for All” Health Plan.