This week Wisconsin’s Senate followed the lead of the General Assembly and approved Governor Scott Walker’s $537 million (over two years) in property and income tax cuts. Governor Walker proposed the tax cuts as a way to “return the state’s surplus to the people who earned it” and his signature on the legislation is all but guaranteed. The cuts include $404 million in across the board property tax cuts and $133 million in income tax cuts that result from lowering the bottom income tax rate from 4.4 to 4.0 percent and reducing the Alternative Minimum Tax.

It’s worth noting that the tax cuts are permanent yet the state’s “surplus” is not guaranteed to last. According to the Wisconsin Budget Project, the tax cuts will mean that “the next state budget will be $658 million in the red before budget deliberations even begin.”

Too bad lawmakers weren’t persuaded by editorial boards at the Milwaukee Journal Sentinel and the Wisconsin State Journal that both (rightly) responded to Governor Walker’s tax cut proposals by encouraging lawmakers to instead use the one-time surplus to help curb the state’s growing structural deficit, or use it towards serious problems like poverty reduction and enhancing K-12 education. 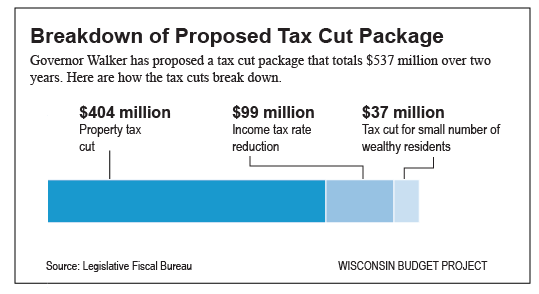