Who Pays Taxes in America?

Read the PDF of this report.

It’s often claimed that the richest Americans pay a disproportionate share of taxes while those in the bottom half pay nothing. These claims ignore the many taxes that most Americans are subject to — federal payroll taxes, federal excise taxes, state and local taxes — and focus instead on just one tax, the federal personal income tax. The other taxes are mostly regressive, meaning they take a larger share of income from a poor or middle-income family than they take from a rich family.[1]

Many Americans do not have enough income to owe federal personal income taxes, but do pay these other taxes. The federal personal income tax is a progressive tax, and the combination of this tax with the other (mostly regressive) taxes results in a tax system that is, overall, just barely progressive. Total tax obligations are, on average, fairly proportional to income.

This table illustrates the share of total taxes (all federal, state and local taxes) paid by Americans in different income groups in 2011. 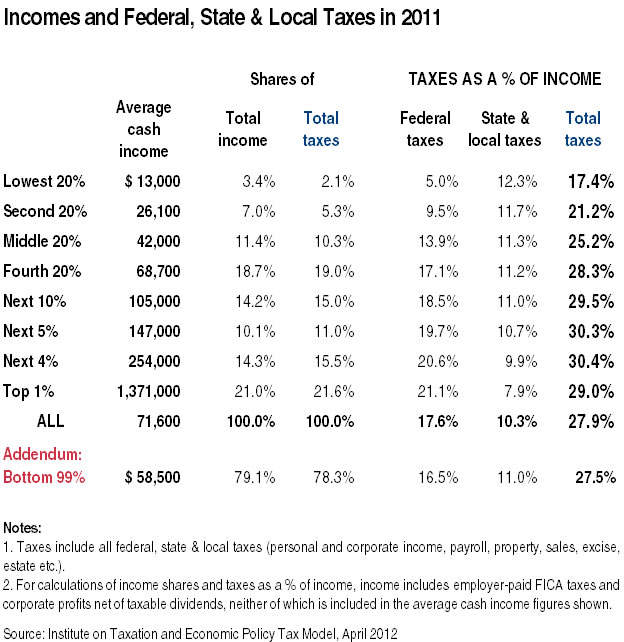 • The share of total taxes paid by the poorest fifth of Americans (2.1 percent) is only slightly less than this group’s share of total income (3.4 percent).

Virtually every person in America pays some type of tax. Everyone who works pays federal payroll taxes. Everyone who buys gasoline pays federal and state gas taxes. People who shop in stores pay the sales taxes that most state and local governments impose. State and local property taxes affect everyone who owns or rents a home. (Even renters pay property taxes because landlords pass some of the tax on to them in the form of higher rents). Most states also have income taxes, most of which are not particularly progressive. 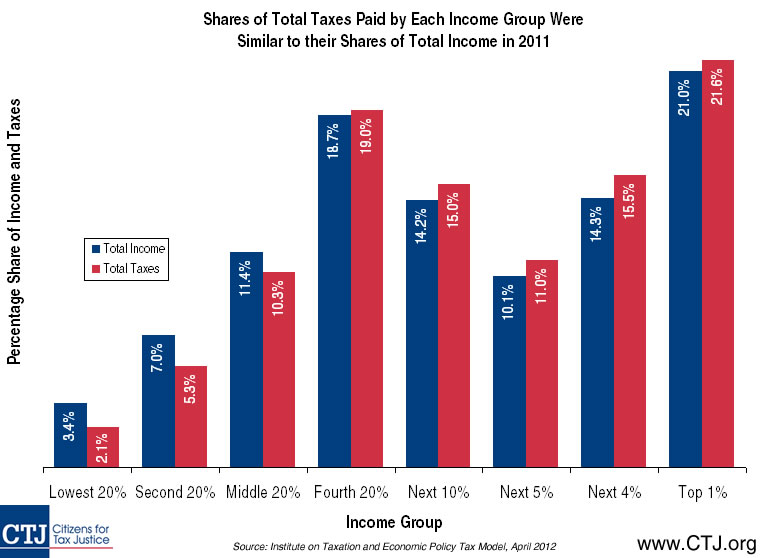 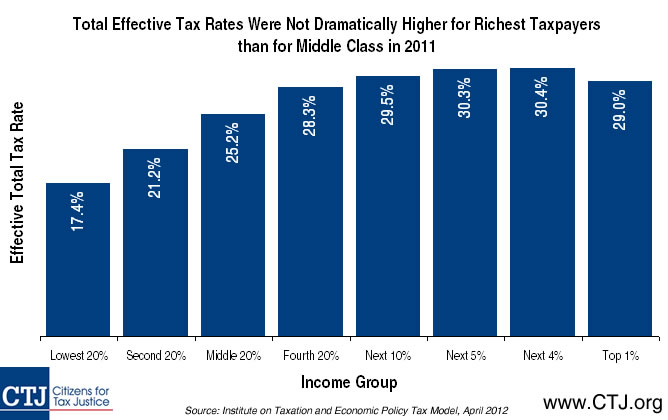 Why the Federal Personal Income Tax Is Progressive

We need the federal personal income tax to be progressive to offset the regressive impacts of these other taxes.

In other words, the parts of the federal personal income tax that seem like a boon to the poor are justified because they offset some of the other taxes that poor and middle-income families must pay.

As these figures illustrate, America’s tax system as a whole is just barely progressive.

[1] For a state-by-state break down of the distribution of state and local taxes, see Institute on Taxation and Economic Policy, Who Pays: A Distributional Analysis of the Tax System in All 50 States, November 2009. http://www.itepnet.org/whopays.htm

[2] There are some high-income individuals who have effective federal tax rates that are much lower than average for their income group. See Citizens for Tax Justice, “How to Implement the Buffett Rule,” October 19, 2011. https://ctj.sfo2.digitaloceanspaces.com/pdf/buffettruleremedies.pdf