This Holiday, The Tax Justice Team Is Thankful For… 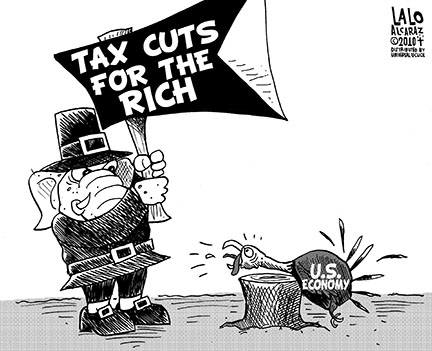 During Thanksgiving we tend to reflect on the year’s events and remember what we’re grateful for. This was a doozy of a year for tax analysts, with the federal government shutting down and state legislatures across the nation threatening deep cuts to major sources of revenue. But, nonetheless, as we look back on the year we have many things to be grateful for:

— That the taxes we all pay help make our communities, our states and country stronger and more vibrant.  Our tax dollars are used to provide public education, clean air and water, well-connected road and public transit systems, safe streets, affordable health care, and income supports for working families.

— That every state that started 2013 with a personal income tax continues to have one, despite efforts in Louisiana, Nebraska, and North Carolina to dismantle their most progressive form of taxation.

— That poor families in Colorado, Iowa, Minnesota, Oregon, the District of Columbia, and Montgomery County, Maryland will find it a little easier to make ends meet now that lawmakers in those states and localities approved expansions to various low-income tax credits.

— For the Americans who have demanded that Congress address the tax avoidance uncovered by CTJ and carried out by huge corporations like GE, Apple, and Boeing.

— That CTJ’s proposal to increase the Medicare payroll tax for the wealthy, and subject their investment income to the same type of tax, is part of the health care reform law in effect now.

— That Senator Max Baucus’s tax reform proposals (so far) do not give corporations their dream of ending all U.S. taxes on profits they claim to earn offshore and that many members of Congress are signalling a new seriousness about closing loopholes that allow corporations to shift profits into offshore tax havens.

Additionally, we thank our donors and friends for making our work possible.  Unlike other groups, who have one large benefactor, CTJ and ITEP rely on our thousands of supporters for funding.  2013 has been a banner year for CTJ and ITEP as we have seen a dramatic increase in online contributions, but our work has never been so important, so please consider CTJ or ITEP in your holiday giving to help us prepare for the tax fights ahead in 2014.

We wish you all a very happy Thanksgiving!