Read this in PDF. 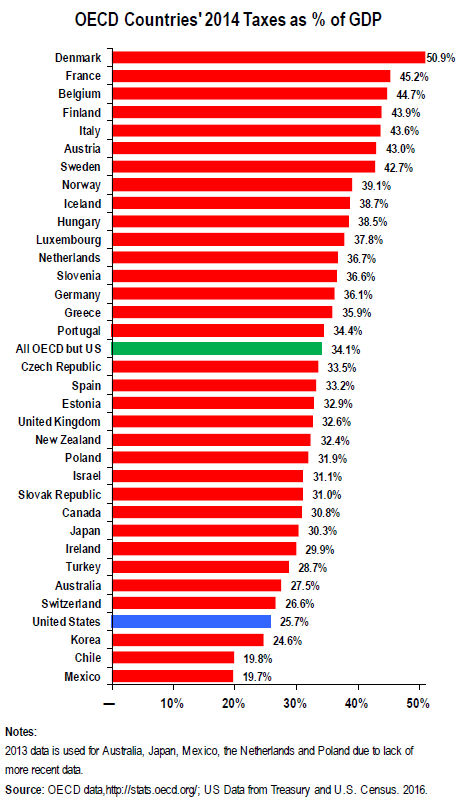 The most recent data from the Organization for Economic Cooperation and Development (OECD) show that the United States is one of the least taxed developed nations.

A tally of all taxes collected at the federal, state and local levels reveals based on 2014 U.S. Treasury data reveal that the United States had the fourth lowest level of total taxes — 25.7 percent of gross domestic product (GDP) — among the 34 OECD countries. Only Mexico, Chile and Korea collected less in taxes as a percent of GDP. The level of taxation in the United States is well below the 34.7 percent OECD weighted average. [1]

These facts offer important context at a time when many presidential candidates and members Congress insist that U.S. taxes are too high and the path to economic prosperity is tax cuts.

This assertion has no basis in sound research and more federal tax cuts could, in fact, set the nation on an irresponsible fiscal path. Already, years of relatively low taxes have increased the national debt and forced draconian spending cuts. The nation’s current relatively low level of taxes leaves us unable to raise enough revenue to adequately fund education, infrastructure and healthcare and other priorities that are crucial to long-term economic growth and competitiveness. It is not a badge of honor that the United States is one of the least taxed developed countries. The OECD data demonstrate that even if lawmakers implemented necessary corporate and individual tax reforms that allowed the nation to collect more revenue in a progressive, fair way, the United States would still remain one of the lowest taxed nations in the developed world.

View video based on the report’s findings:

[1] OECD continues to use Bureau of Economic Analysis (BEA) estimates of corporate tax payments, while we use actual collections as reported by the U.S. Treasury in its “Monthly Treasury Statements” of federal tax collections and by the U.S. Census Bureau for state & local corporate income taxes (“U.S. Census Bureau, Quarterly Summary of State and Local Government Tax Revenue, Table 1. National totals of state and local government tax revenue, by type of tax”). Previously, OECD’s approach hugely overstated US corporate taxes for several reasons. OECD has corrected most of its errors, but not all. The biggest remaining difference between OECD’s figures and actual U.S. corporate tax collections is that OECD appears to include “Taxes paid by domestic corporations to foreign governments on income earned abroad” as corporate taxes paid to US governments.