The billionaire brothers Charles and David Koch are in the news once again as they step up their efforts to influence elections and the political process with a new super PAC called Freedom Partners Action Fund. It’s worth thinking about how tax policy could be affected if they succeed. 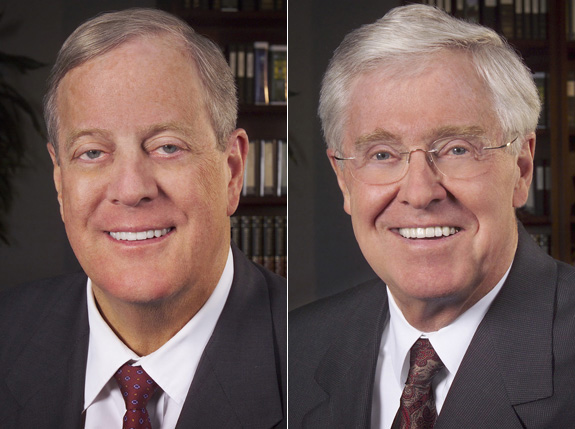 Last year, the Koch-Brothers-funded Americans for Prosperity released a 37-page report laying out the group’s vision for what it calls “tax reform.”

The paper is vague or incoherent in its details, but the group’s ultimate goal is stated very clearly.

Here are a few quotes from the paper:

■“Taxes should not target individuals based on their ability to pay” (page 13).

■ “[P]rogressive taxation is bad policy from a moral perspective” (page 29).

■ “AFP believes that the tax code should not be used to demonstrate preference to individuals on the basis of their income status” (page 28).

In other words, AFP wants to cut taxes on the wealthy by huge amounts.

Some of the details of how AFP would achieve its goal include: a large, although unspecified  reduction in the top personal income tax rate, lower taxes on capital gains, and what amounts to the virtual elimination of the corporate income tax.

Having called for gigantic tax cuts for the wealthy, AFP also says that it wants its plan to raise the same amount of tax revenues as current tax law (page 1).

Under the laws of arithmetic, there is only one way to reconcile these two goals: AFP wants to increase taxes sharply on the middle- and low-income American families.

That’s the ugly vision that Americans for Prosperity and its wealthy backers are promoting.

Corporate tax elimination: When corporations earn profits, there are essentially two things it can do with those profits. It can pay dividends to shareholders or it can reinvest the profits to increase future profits. Under the AFP plan, both of these uses of profits would be tax deductible. So corporations would have no taxable income. Close to half of the corporate tax is ultimately paid by the richest one percent of Americans.

Capital gains: AFP proposes to tax capital gains at lower rate than other income. It does not say how much lower. At one point, however, it endorses indexing the basis of capital assets for inflation, which would amount to a 30-40 percent exclusion for capital gains (on top of the lower capital gains tax rate). Under the 17 percent flat rate tax than AFP praises, capital gains would not be taxed at all. Two-thirds of all capital gains reported on tax returns go to the best-off one percent.