The Distributional and Revenue Impact of Hillary Clinton’s Tax Plan

A new Citizens for Tax Justice (CTJ) analysis of the tax plan proposed by presidential candidate Hillary Clinton as of October, including recently proposed changes to the child tax credit, finds that the plan would raise federal revenues by $1.46 trillion over the next decade while providing a small tax cut on average to the bottom 95 percent of American taxpayers. The analysis also shows that those in the top 5 percent would see a significant tax increase. 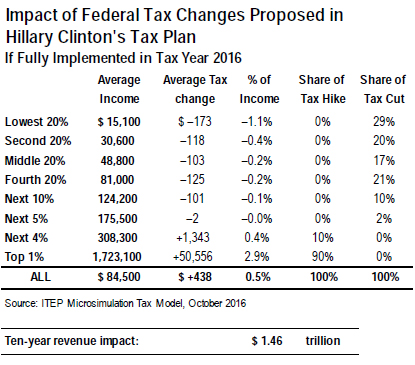 Clinton’s tax proposal would increase federal revenues by $1.46 trillion over the next decade. The plan would raise $850 billion overall from the personal income tax, which includes a $1.055 trillion revenue increase coupled with the $209 billion cost of her proposals to increase the child tax credit. In addition, the plan would increase revenue from the corporate income tax by $128 billion and increase revenue from the estate tax by another $483 billion.

The Clinton plan would cut taxes overall for each income group except the top 5 percent. Individuals in the lowest 20 percent would see the greatest gain, an increase in after tax income of 1.1 percent.

Without the child tax credit proposals, the effect of Clinton’s proposed tax changes on low- and middle-income families essentially would be zero. The inclusion of these child tax credit enhancements is the key reason the vast majority of taxpayers would receive a tax cut. 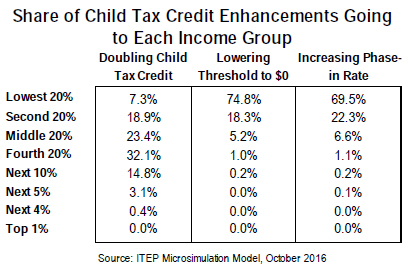 Understanding the Impact of the Child Tax Credit Changes

Clinton’s plan to enhance the child tax credits has three key components: it would double the maximum tax credit from $1,000 to $2,000 for each child up to age 4, lower the threshold for refundability from $3,000 to $0 and increase the phase-in rate from 15 percent to 45 percent for families with young children. Two of these provisions, the lower threshold and increased phase-in rate, would be highly progressive, with about three-quarters of the benefits of the lower threshold going to the bottom 20 percent and about 70 percent of the benefits of the increased phase-in rate going just to the bottom 20 percent of taxpayers. The provision to double the maximum credit would largely go to middle-income families.