The Case of the Missing $96 Billion in Corporate Taxes

The latest monthly statement by the Treasury Department contains a startling revelation: the amount that Treasury expects to collect in corporate taxes in 2012 has been slashed by more than 28 percent, from $333 down to $237 billion.

With such a dramatic revision, one might expect that lagging corporate profits or a sudden 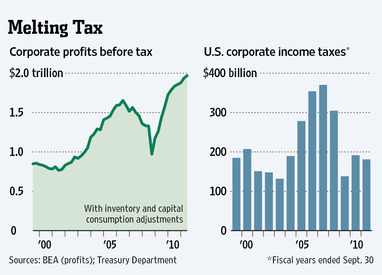 economic disruption is to blame. In reality however, corporate tax revenue continues to limp in spite of the fact that corporate profits have rebounded to record highs.

If corporate profits are not behind this $96 billion drop in expected corporate tax revenue, then what is?

The Wall Street Journal’s David Reilly suspects that there are two critical drivers: the offshoring of more profits through overseas entities by multi-national corporations; and the continuation of extravagant corporate tax breaks for accelerated depreciation of assets like equipment. Last month, the Congressional Budget Office (CBO) came to the same basic conclusion, explaining that corporate tax breaks and loopholes played an important role in driving the corporate tax rate to a 40 year low in 2011.

In order to prevent the continued decline of the corporate tax, Congress and the President should enact revenue-positive corporate tax reform, rather than their current revenue-neutral approach. Right now, political leaders of all stripes are proposing merely to eliminate some tax breaks but continue or even expand others and possibly reduce the statutory rate. With the federal deficit growing every day, asking profitable U.S. companies to pay something closer to the statutory tax rate is a reasonable (not to mention popular) approach.