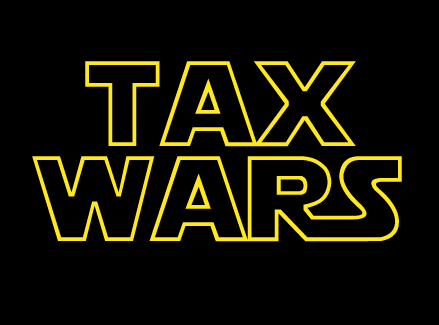 Even in the universe of Jedi, Death Stars and Ewoks, tax policy plays a surprisingly important role in driving the events of the day. In anticipation of the release of the newest Star Wars movie, we just wanted to share some of the little known tax policy lessons from the Star Wars universe.

1. A trade tax dispute sets off the turmoil central to the Star Wars movies.

The first words in the opening crawl of Star Wars Episode I: The Phantom Menace read, “Turmoil has engulfed the Galactic Republic. The taxation of trade routes to outlying star systems is in dispute.” The beginning crawl then explains that to protest trade taxation the Trade Federation has set up a blockade of all shipping to the planet of Naboo, which causes the Supreme Chancellor to dispatch two Jedi Knights to help resolve the tax dispute. In other words, the chain of events set off in The Phantom Menace begin with a classic interjurisdictional dispute over the taxation of trade.

Taxes on imported goods, known as tariffs, used to play a central role in funding the U.S. federal government. Through the late 18th and early 19th century, these revenues represented between 50 and 98 percent of all government revenue. During the late 19th and early 20th centuries, the dependence on tariff revenue dropped dramatically due to the rise of the income tax and the perception that the tariff was both regressive and economically distortive. Today tariffs represent just one percent of total federal revenue.

While most lawmakers now understand the potential for tariffs to set off turmoil on a worldwide (or galactic) scale, the real world Donald Trump has proposed to massively increase tariffs during his presidential campaign.

2. The Star Wars universe has problems with corporate tax enforcement and shell companies.

For those who want to go deeper into the Star Wars universe, there is a vast literature of books that more fully fill out how this alternative galaxy functions. In the book “Republic Commando: True Colors,” set between the second and third Star Wars movies, the author reveals that the Star Wars universe faces many of the same tax enforcement problems that we face in the world today.

Specifically, the book details the story of two employees of the Galactic Republic’s Treasury Corporate Tax Enforcement department who discover that a shell corporation Dhannut Logistics, presumably controlled by Darth Sidious (aka Emperor Palpatine), is being used to funnel money to pay for the construction of a massive clone army. Similarly, anonymous shell corporations incorporated in states like Delaware are frequently used as a conduit for illicit activities like money laundering and tax evasion. Given this, it is clear that both the Star Wars universe and the United States could benefit from requiring the disclosure of the beneficial ownership of corporations.

3. Murder is so frequent on the planet of Tatooine that there is a tax on it.

It is very common for jurisdictions to raise a lot of their revenue by taxing those things that they have in excess. For example, Nevada’s budget is very dependent on gambling revenues, North Dakota’s on natural gas and Florida on tourism. The one thing that the planet of Tatooine, the home world of Luke Skywalker, has in excess is murder, which maybe the motivation behind Jabba the Hutt’s decision to impose a so-called “murder tax.” While a tax on murder may raise revenue in the short term, it is likely that this source of revenue is not necessarily sustainable in the long run considering that each transaction necessarily requires a one person reduction in the tax base. Tatooine and many U.S. states dependent on similarly unsustainable revenue sources would be much better off in the long term if they enacted a broad based income tax to fund public services.