Here’s our weekly wrap up of tax debates:

Tax Foundation Revives Voodoo Economics
Carl Davis, ITEP’s Research Director, takes a close look at the Tax Foundation’s TAG (Taxes and Growth) model and concludes that it “takes an exaggerated view of the impact that taxes have on the economy.” For more on the flaws of the TAG model read the full paper here.

Our Take On President Obama’s Last Budget
This week President Obama released his budget, which contains $3.2 trillion in tax increases over the next ten years, most of which would fall on corporations and wealthy taxpayers. But the President also lets corporations with lots of offshore income off the hook with a proposed “transition tax.” The transitional tax would actually give $97 billion in tax cuts to just ten of our country’s biggest tax avoiders. Click here for more on the President’s budget.

Carl Davis, ITEP’s Research Director, took a close look at the President’s proposed oil tax that would add an additional $10.25 to the price of a barrel of crude oil. Read more about it here.

Corporate Tax Watch: Celanese Corporation
Celanese is a Fortune 500 company that makes engineering polymers (go ahead and Google that – we weren’t sure what they are either). Come to find out, these polymers are critical components used in a variety of industries: agriculture, pharmaceutical, aerospace, and even the automotive industry. Despite what we don’t know about engineering polymers, we do know that the company generates 30 percent of its profits from just four small tax haven companies. Click here for more on Celanese and its use of tax havens.

Bernie’s Tax Plan
CTJ staff analyzed the Sanders health care tax plan and found that his proposal would raise $13 trillion and yet increase after-tax incomes for all income groups except the very highest. Read CTJ’s full report on the plan (PDF). Don’t have time to read the full report? Here’s the CliffsNotes version.

Internet Tax Ban is a Defeat for Good Tax Policy
Congress just passed a permanent ban on taxing internet access. Here’s our take on why this ban is wrongheaded.

2016 State Tax Policy Trends:
Shifty Tax Proposals
This week ITEP Senior Analyst Lisa Christensen Gee took a careful look at the many states that are debating whether to reduce one tax to pay for increasing another tax. Tax shift proposals in Arizona, Mississippi, Indiana, Georgia, New Jersey and South Carolina are highlighted in this piece.

Addressing Poverty and Inequality Through Tax Breaks for Working Families
ITEP Senior Analyst Aidan Russell Davis examines low-income tax credit debates in states across the country. We know that low-income credits are a vital tool for keeping low income families above the poverty line. Click here for more on how states are enhancing and protecting their Earned Income Tax Credit (EITC) – and check out our updated policy brief on EITCs here. 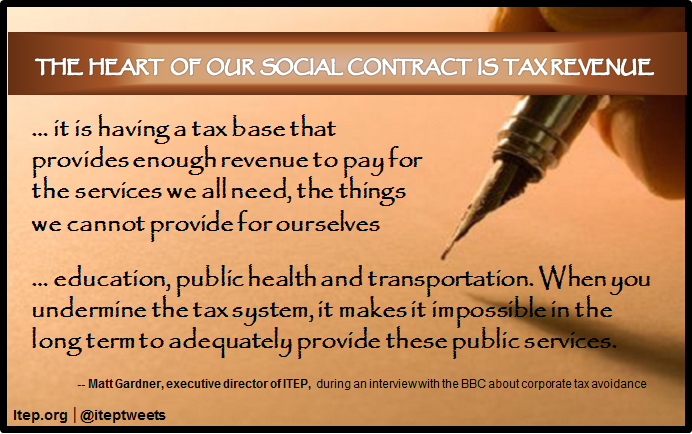 ICYMI: This week our State Rundown focused on states with shortfalls specifically: Arizona, Kansas, Kentucky and Louisiana. To get a copy of the Rundown in your mail box sign up here.

What a full week! Have a super weekend. Don’t hesitate to send me feedback at:  kelly@itep.org

Sign up to receive the Tax Justice Digest in your very own inbox.