Thanks for reading the Tax Justice Digest. We hope you are having a great week. In the Digest we recap the latest reports, posts, and analyses from Citizens for Tax Justice and the Institute on Taxation and Economic Policy.

This week CTJ released a report detailing the cost of Sen. Ted Cruz’s tax plan. Despite proposing the largest tax cut of any candidate ($13.9 trillion), Cruz’s tax plan would increase taxes on 60 percent of Americans. Read all the details here.

This week our Rundown takes a close look at the DuPont/Dow merger along with tax and budget happenings in West Virginia and Florida. We also offer a list of states where legislative sessions have ended. Read our St. Patrick’s Day edition of the Rundown.

In a recent blog post, ITEP’s Executive Director Matt Gardner makes a good case for why Nabisco deserves even closer scrutiny after deciding to lay off 600 works in its Chicago plant. Turns out the company is also likely dodging taxes thanks to offshore subsidiaries. Click here for all the details.

CTJ’s Senior Policy Analyst Richard Phillips offers his take on the budget released earlier this week from the Congressional Progressive Caucus. Richard writes the budget has “important policy ideas that, shamefully, have no chance of passing in the current political climate. Read his full post here. 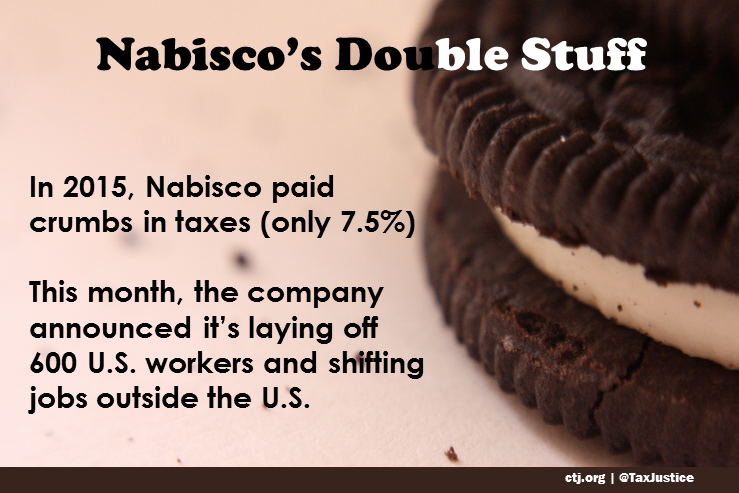 ICYMI: CTJ recently updated its analysis of Trump’s Tax Plan so now you’ll be able to find the cost distribution of the tax plan by income level and the net effect of paying for the tax cut in one report. The full report is here.

If you have any feedback on the Digest or just want to send some lucky greetings email me here: kelly@itep.org