In the Tax Justice Digest we recap the latest reports, posts, and analyses from Citizens for Tax Justice and the Institute on Taxation and Economic Policy.

Just in time for Tax Day, CTJ and ITEP have prepared a variety of materials that answer common Tax Day questions.

Who Pays Taxes?
Short answer: Everyone.
CTJ is the only think tank that collectively analyzes all taxes (federal, state, local, excise, etc.) to calculate total effective tax rates. In this April 2016 update, CTJ finds that each income group’s share of total taxes is more or less on par with their share of all income.

Profitable Corporations Still Managing to Pay $0 in Federal Income Tax
Eight U.S. corporations, including some common household names like Netflix, paid effective federal tax rates of zero in 2015, a new CTJ report finds. For most of them, last year wasn’t an aberration. Over a five-year period, these companies managed to pay little or nothing in federal income taxes. Read more.

Say What? GE and Verizon Defend Tax Record
This week CEOs of General Electric and Verizon wrote op-eds claiming that their companies actually do pay their “fair share” of taxes. CTJ analysts took a close look at both companies’ tax records over the last 15 years and set the record straight in this new post.

Five Things You Should Know on Monday
Myths about taxes and Tax Day abound. This new brief from CTJ outlines five facts you should know on Tax Day. For example, the U.S. statutory corporate income tax rate is 35 percent, but many companies pay at a much lower rate. Click here to learn four other Tax Day facts.

Think U.S. Taxes Are High Compared to Other Developed Nations?
Check out this informative video, Taxes and the U.S. Economy. Compared to other developed nations, tax collections as a share of the U.S. economy are substantially below average. The data from the video comes from this recent CTJ report.

What about State Taxes?
ITEP analyzes state and local taxes in all fifty states. Regrettably, all 50 states have regressive tax systems that tax the poor far more than the rich. Click here to see how taxpayers at different income levels are impacted by your state’s tax structure.

Where are US Companies Stashing Profits?
CTJ finds that American corporations are using tax gimmicks to shift profits earned in the U.S. to subsidiaries located in tax haven countries to avoid paying corporate taxes. In some of these countries the U.S. profits actually exceed the tax haven country’s Gross Domestic Product. 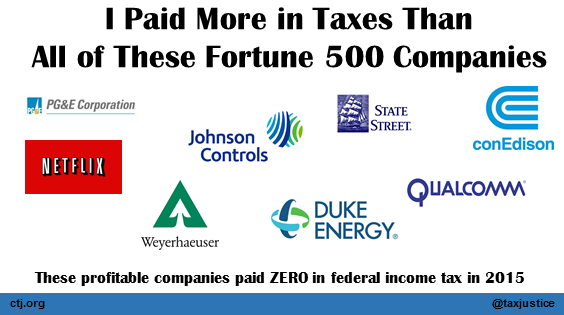