Call to Action: The Time is Now
We feel like a broken record, but the tax news on the federal level is (still) all about tax extenders – a package of legislation mostly made up of tax breaks for businesses that have actually already expired. Congress shouldn’t resurrect these misguided and costly giveaways. Instead they should opt for supporting another kind of extender – the extensions to the Earned Income Tax Credit and Child Tax Credit. Working families in every state benefit from these credits and you can find out just how many by clicking on our interactive map.
You can use this link to contact your representatives and tell them to support working family tax credits.
Memo to Mark Zuckerberg: Charity Begins At Home
Facebook CEO Mark Zuckerberg made waves this week with his announcement that he will eventually give away virtually all of his wealth for charitable purposes. But for those familiar with the tax avoidance tactics practiced by Facebook, it should come as no surprise that Zuckerberg’s approach to philanthropy is set up to avoid tax liability. Read CTJ’s full take on the issue.
The International Community Gets It Right. Will We?
Last month, leaders of the 20 largest economies in the world approved an action plan developed by the Organisation for Economic Co-operation and Development (OECD) that, could help ensure that multinational corporations pay their fair share in taxes. Oddly enough not all U.S. lawmakers think making corporations pay their fair share is a good thing.  Here are CTJ’s thoughts on the two congressional hearings that took place this week which basically gave some lawmakers an opportunity to showboat for corporate special interests.
Grover and the Gas Tax
ITEP’s transportation funding expert Carl Davis has written a clever piece about the connection (or lack of one) between the notorious “no new taxes pledge” and congressional aversion to hiking the gas tax.
State News:
Illinois Needs a Budget
Here it is December and the home state of the Bears, Cubs, Red Birds, Salukis (we could go on) still doesn’t have a budget. According to ITEP’s Sebastian Johnson, the state’s political leaders lack the urgency to make it happen.
State Rundown: Who Needs a Budget
In this week’s rundown read all about how Pennsylvania doesn’t have a budget and how likely it is that tax cuts will be debated in Mississippi and Florida in the new year.
Shareable Tax Analysis: 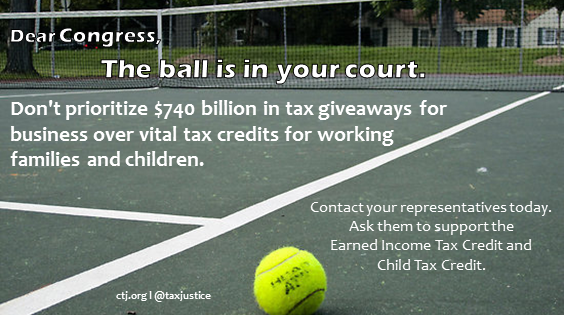 ICYMI:   We talk a lot about tax reform, but what does tax reform actually look like? Check out CTJ’s three guiding principles for tax reform.
Hope you had a lovely Thanksgiving! Thanks for reading. Questions, suggestions, just want to say hi? Email your mostly fearless Tax Justice Digest compiler anytime at kelly@itep.org
For frequent updates find us on Twitter (CTJ/ITEP), Facebook (CTJ/ITEP), and at the Tax Justice blog.