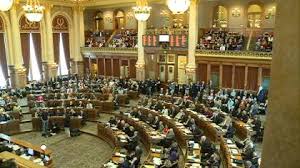 Governor Terry Branstad has made “reforming” (cutting) the property taxes paid by Iowa businesses a top priority since taking office. We described the latest attempts to reduce commercial property taxes here. But Senator Joe Bolkcom (chair of the Ways and Means Committee) has repeatedly demanded that any change to corporate property taxes must be accompanied by an increase in the state’s Earned Income Tax Credit (EITC).

Now a compromise bill has passed the Iowa Senate and is on its way to Governor Branstad’s desk. And, as tends to happen with compromise, nobody is completely happy with the final product.

If signed into law by the Governor, here is what that legislation would do: assess commercial and Industrial property at 90 percent of its value (down from 100 percent); introduce a new assessment cap of 3 percent for residential and agricultural property; introduce a new nonrefundable income tax credit if the Taxpayers Trust Fund exceeds $30 million; and double the EITC from 7 to 14 percent.

The Governor would have prefered  that commercial and industrial property be assessed lower, at 80 percent of its value, but said this of the compromise: “I’m hopeful maybe we can do more in future years. But I think this is the art of what was possible with this General Assembly. I’m pleased with the compromise bill that we’ve got tentative agreement on.”

Peter Fisher of the Iowa Fiscal Partnership pointed out, however, “It’s Christmas for Walmart and McDonald’s, which will happily receive property-tax breaks that they don’t need, while their low-wage employees receive a better Earned Income Tax Credit. This Christmas tree will grow bigger with each passing year, leaving less room in local budgets to respond to needs.”

Of course we applaud any increase in the EITC, and doubling that credit is a meaningful tax cut for low and middle income workers. But as the Iowa Fiscal Partnership reminds us, “If there is any question as to who benefits, Iowans should note that the EITC boost will be $35 million when fully phased in, compared to about 10 times that for property owners.”  The pricetag for these property tax changes is likely to increase in future years, and will become a constant strain on local government budgets.