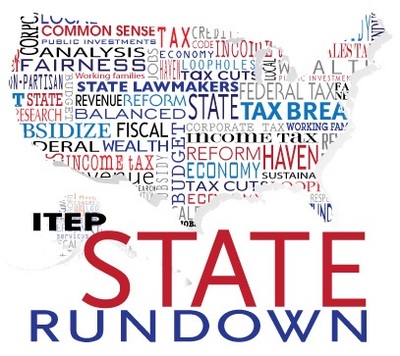 Thanks for reading this Groundhog day edition of the State Rundown. Today we are taking a close look at developments in Oklahoma, Kansas, and Indiana.  There’s a link below to an especially good editorial in The Witchita Eagle outlining  critiques of Kansas Governor Brownback’s regressive tax policies. You’ll also find a helpful listing of State of the State addresses happening this week.

Oklahoma legislators fear the state could be headed for a second revenue failure before the end of the fiscal year if oil prices continue to drop, forcing spending cuts across the board for all state agencies. The state’s previous revenue failure required a cut of 3 percent and the state’s school superintendent says another cut might mean schools running out of money and shutting their doors. To help deal with the state’s bleak fiscal situation, Gov. Mary Fallin has proposed raising significant new revenues by expanding the state’s sales tax base, increasing the cigarette tax by $1.50 per pack, and eliminating the state’s bizarre state income tax deduction for state income taxes paid. While describing Fallin’s proposal as a “good starting point,” the Oklahoma Policy Institute also observes that Oklahoma’s current revenue crisis was partly brought on by the legislature’s decision to allow a regressive and unaffordable income tax cut to take effect this January. Unless lawmakers reverse that decision, state revenues will decline by $147 million during the upcoming fiscal year.

An editorial in The Wichita Eagle calls out Kansas Gov. Sam Brownback and legislators for their continued reliance on regressive food taxes to shore up the budget. In 2012, when Brownback pushed through his tax cut experiment, the state sales tax on food was scheduled to drop to 5.7 percent; today, the sales tax on food is 6.5 percent. When local taxes are included, the combined rate can be as high as 10 percent — the nation’s highest. A recent study (PDF) found that “A household in the lowest income group pays anywhere from 2.7 percent to 8.4 percent more of their income in taxes on groceries than does a household in the highest income level.” Representative Mark Hutton has proposed cutting the state sales tax rate on groceries to just 2.6 percent and would make up the revenue by eliminating the state’s costly and ill-targeted personal income tax exemption for all non-wage business income.

Indiana lawmakers seem to have taken a page out of South Carolina (and Michigan’s) playbook in considering a transportation package pairing gas tax increases with income tax cuts. House Bill 1001 would increase the state’s gasoline excise tax by 4 cents to 22 cents per gallon, the first increase in over thirteen years. The tax on diesel fuel would increase by 7 cents per gallon. House Republicans inserted a phased-in 5 percent income tax cut into the transportation package to entice Gov. Mike Pence and other lawmakers who might be on the fence to support the gas and diesel tax increases. The package also raises more than $200 million through a $1 per pack cigarette tax hike.  An ITEP analysis of the proposal found that the average taxpayer among the bottom 80 percent of earners would see a tax hike under this plan while the wealthiest 20 percent of taxpayers would benefit from a tax cut on average.

State of the State Addresses This Week:

If you like what you are seeing in the Rundown (or even if you don’t) please send any feedback or tips for future posts to Sebastian Johnson at sdpjohnson@itep.org