On Dec. 12, 2014, Rep. John Delaney (D-MD) proposed a new version of his “repatriation holiday” tax plan. The latest version would require multinational corporations to pay a token amount of taxes on their accumulated offshore profits and exempt those profits from any further U.S. income tax.

Delaney’s new plan differs from his previous proposal, which would have allowed corporations to choose to pay a small tax on their offshore profits in exchange for tax-exemption in the future.

Delaney estimates that his proposal would raise $170 billion in revenue in the short run. He would use 70 percent ($120 billion) of that to replenish the Highway Trust Fund for six years and 30 percent ($50 billion) to capitalize a federal “infrastructure bank.” Under his “deemed repatriation,” U.S. corporations more than $2 trillion of offshore profits would sensibly be treated as potentially taxable, but his plan would then arbitrarily exempt 75 percent of those profits leaving only 25 percent subject to the repatriation tax.

The biggest problem with Delaney’s repatriation proposal is that it would allow companies such as Apple and Microsoft, which have parked hundreds of billions of dollars of U.S. profits in offshore tax havens, to pay a U.S. tax rate of no more than of 8.75 percent, instead of the more than 30 percent tax they should pay on these profits.

As a complement to the repatriation proposal, Delaney’s legislation would create an 18-month deadline for Congress to enact a tax overhaul. If such an overhaul is not enacted, Delaney’s plan would implement a fallback international tax change along the lines of former Senate Finance Committee Chairman Max Baucus (D-MT)’s Option Z framework, but with a sliding scale rate. 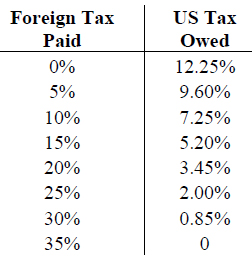 Delaney’s fallback proposal would end the deferral of U.S. taxes on offshore profits of American companies, but it would exempt a significant percentage of “active income” depending on the taxes, if any, already paid to foreign countries. For example, a companywith all of its offshore money in tax havens (with no tax paid) would pay the U.S. government only a 12.25 percent tax rate on its “active” foreign income. A company that paid a 25 percent rate on offshore income would owe the U.S. only 2 percent in taxes on “active” income. (See the table for a breakdown of the rate paid at different levels of foreign taxes.) For “passive” income, however, Delaney follows Baucus’s Option Z, and would not allow any exemption from the 35 percent U.S. corporate tax rate. “Passive income” includes income such as royalties that are very easy to shift into tax havens.

Corporations should pay the same tax rate on their international income as they pay on their domestic income. By that standard, the fallback international tax reform included in Delaney’s proposal fails because it continues a system in which the foreign profits of American companies would be taxed at a substantially lower rate than their domestic income. In other words, companies would still have a significant incentive to shift income and jobs offshore to avoid taxes.

In addition, Delaney’s proposed lower tax rate on “active” income would likely lead to a huge effort by corporations to redefine much of their passive income so that it fits the definition of active income, as General Electric and others have done under the current system.