Representation Without Taxation: Fortune 500 Companies that Spend Big on Lobbying and Avoid Taxes

Marking the second anniversary of the Supreme Court’s decision 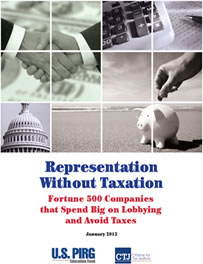 in the Citizens United vs. Federal Election Commission case, this report takes a hard look at the lobbying activities of profitable Fortune 500 companies that exploit loopholes and distort the tax code to avoid billions of dollars in taxes.

We identify the “Dirty Thirty” companies that were especially aggressive at dodging taxes and lobbying Congress. These companies so deftly exploited carve outs and loopholes in the tax code that all but one of them enjoyed a negative tax rate over the three year period of the study, while spending nearly half a billion dollars to lobby Congress on issues including tax policy. Altogether they collected $10.6 billion in tax rebates from the federal government.

Ordinary American taxpayers and small businesses must pick up the tab when major corporations avoid their taxes. Spread out over every individual tax filer in America, the taxes avoided by the Dirty Thirty break down to an average of $481 per taxpayer over the three years.

A total 280 profitable Fortune 500 companies collectively paid an effective federal income tax rate of 18.5 percent, about half of the statutory 35 percent corporate tax rate, while receiving $223 billion in tax subsidies.

These corporations include most of the Fortune 500 companies that were consistently profitable from 2008 through 2010. Collectively they paid $250.8 billion in federal income taxes on a total of $1,352.8 billion in U.S. profits. If they had paid the statutory 35 percent tax on their profits, they would have paid an extra $223 billion. There are thousands of perfectly legal ways that corporations, with the help of armies of high-paid lawyers and accountants, can reduce their tax burden

The report explains why exploiting offshore tax havens is an example of tax dodging at its worst and that at least 22 of the Dirty Thirty reported subsidiaries in offshore tax havens like the Cayman Islands. Since profit artificially shifted offshore is often counted as “foreign” profits, the data likely underestimates the amount lost due to tax havens.

To stop the abusive use of tax havens, we lawmakers must end rules allowing U.S. companies to defer taxes on their offshore profits. In the meantime, there are concrete steps Congress can take that would stop the worst of the abuses by requiring more honest rules and reporting.

To limit corporate money in elections, lawmakers should: