Congressman Dave Camp, the Republican Chairman of the House Ways and Means Committee, released a plan today that would dramatically slash the federal corporate income tax rate from its current 35 percent, which Camp says is currently the “highest corporate tax rate in the industrialized world,” to 25 percent in order to make the U.S. more “competitive.”

But the premise that our corporate tax is too burdensome on companies is wrong, and my colleagues and I prove it in a report that we have released today. This new report from Citizens for Tax Justice (CTJ) and the Institute on Taxation and Economic Policy (ITEP) finds that most profitable U.S multinational corporations actually pay higher effective tax rates in the foreign countries where they do business than they pay here in the U.S.

Our report examines the Fortune 500 corporations that have been consistently profitable for the previous five years and finds that as a group they paid just 19.4 percent of their profits in U.S. income taxes over the five-year period, while a third paid less than 10 percent.

Several well-known companies paid no U.S. income taxes at all over the five-year period studied — including General Electric, Verizon, Priceline, Boeing, Corning and 21 other profitable corporations.

While it’s true that even a pro-business politician like Dave Camp acknowledges that we must end some of the special breaks and loopholes that allow this rampant tax avoidance, he unfortunately proposes to give all the revenue saved right back to corporations by reducing the official corporate tax rate from 35 percent to 25 percent. This is why he describes his approach as “revenue-neutral.”

It is bizarre and unbelievable that Congress just spent the past couple of years fighting about whether or not children must be kicked out of Head Start, food aid must be restricted, and medical research must be slashed all because of an alleged budget crisis, and yet the top tax-writer in the House of Representatives proposes that we make no attempt to increase the amount of tax revenue paid by large, profitable corporations. This approach makes no sense as policy, and it’s not supported by the American people. 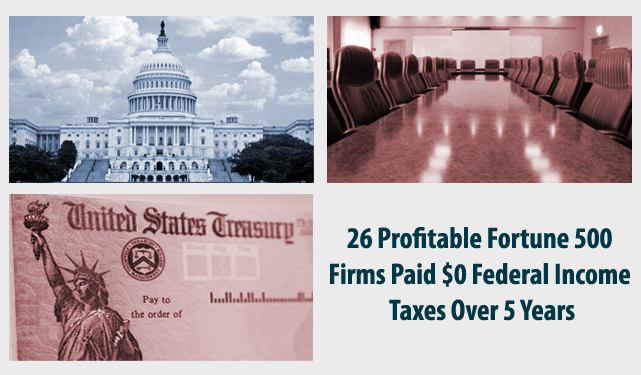 What’s worse, Camp’s plan actually expands corporate tax loopholes in some ways. One problem with our current tax code is the rule allowing American corporations to “defer” paying U.S. taxes on profits that are officially “offshore,” which encourages companies to make their U.S. profits appear to be earned in countries where they won’t be taxed at all. Camp claims that several of his proposals would address this, but under his proposal the default rule would be that most offshore profits are taxed at a rate of just over one percent, essentially increasing the rewards for any American corporation that manages to make its U.S. profits appear to be earned in Bermuda or the Cayman Islands. If this is what Congressman Camp calls a “competitive” tax system, then the American people want no part of it.

In the coming days we will provide analyses of the many other problematic parts of Congressman Camp’s plan.