Notes on the Budget Surplus and Capital Gains

Fiscal 1998’s continuation of the strong federal tax revenue growth that began in fiscal 1993, along with severe spending restraints, makes the first federal budget surplus since the Johnson administration highly likely this year. 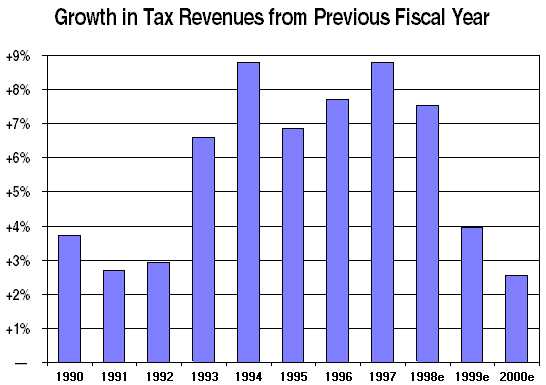 upwards of $50 billion more than it takes in this fiscal year.

This year’s high revenue growth, although greater than was predicted when last year’s budget agreement was completed, is merely a continuation of strong revenue growth that began in 1993 (see chart). Total federal tax revenues have risen by an average of 7.7% a year since 1993, including a now anticipated rise of 7.5% in fiscal 1998 for the full year. Meanwhile, federal spending has risen by only 3% per year. Thus, the current surplus has been several years in the making.

The surge in tax revenues that began in 1993 has been driven both by the strong economy and by the upper-income tax increases that were enacted and took effect in 1993:

Is it Capital Gains?

Some leaders in Congress see the latest tax revenue data as evidence that the 1997 reduction in capital gains tax rates has been a major cause of recent revenue growth. 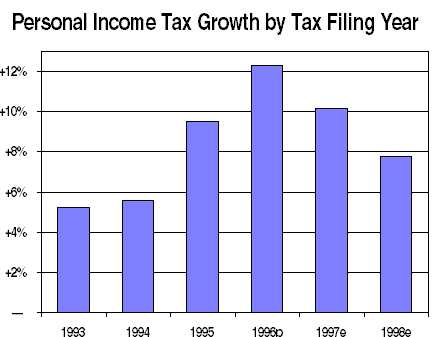 Indeed, GOP leaders are reportedly pressuring the nonpartisan analysts at the Congressional Budget Office and the Joint Committee on Taxation to adjust their tax models so that they will show an additional capital gains tax cut as a huge revenue raiser. There are several flaws in this theory, however.

For one thing, two-thirds of the revenue increase through May of fiscal 1998 compared to fiscal 1997 has come from increased taxes withheld from wages. As for capital gains, any increase merely reflects a long-term trend, not a response to last year’s tax cut:

In other words, Gingrich is trying to give the 1997 tax act credit for the surge in capital gains that took effect in 1996, the year before it was enacted. To be sure, Gingrich recognizes that this is a hard case to make. But Gingrich is reportedly relying on a novel theory put forward by former Reagan economic adviser Larry Kudlow to contend that the 40% surge in capital gains realizations in 1996 reflects investors’ mistaken expectation that Congress would pass a large, retroactive capital gains tax cut sometime late in 1996. 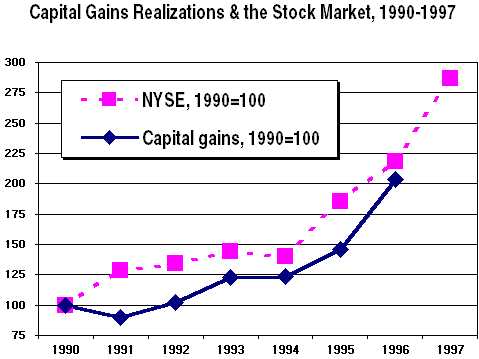 Let’s recall a little history. On November 30, 1995, not long before the government shutdown, Congress did indeed send a major capital gains tax cut to the President (as part of its budget reconciliation bill). The measure was quickly vetoed by President Clinton. That was the end of any serious consideration of a capital gains tax cut until the 1997 budget agreement.

So, there was no basis for investors to believe in 1996 that there was any chance that a retroactive capital gains tax cut could pass Congress and be signed by the President.

Conclusion: So here’s what we know at this point: 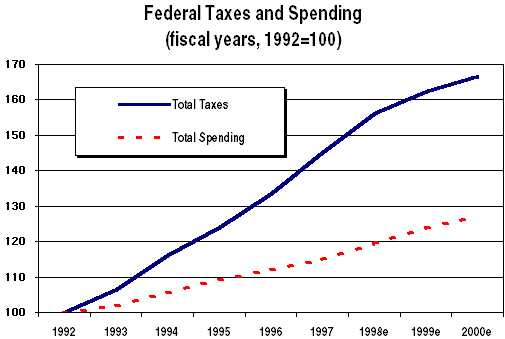 Sources for all data and estimates:  Internal Revenue Service for calendar year tax data through tax year 1996 (the latest available). Office of Management and Budget for tax and spending data for fiscal years through 1997. Treasury Department “Monthly Budget Statements” for tax revenues and spending by month in fiscal 1998 through May. Office of Management and Budget (May 1998) and Congressional Budget Office (June 1998) for revenue and spending estimates beyond May of 1998.