Earlier this week, presidential candidate Jeb Bush released the details of his plan to restructure personal and corporate income taxes. A new Citizens for Tax Justice analysis of the tax plan reveals that it would cut personal income taxes by more than $227 billion a year, and it would reserve the biggest tax cuts for the wealthiest 1 percent of Americans.

What the Bush Plan Would Do

If Bush’s tax plan were in effect this year, the individual income tax proposals alone would reduce annual revenue by more than $227 billion. (Bush’s proposal to sharply reduce corporate income taxes and repeal the federal estate tax is not included in this estimate, but those proposed tax changes would sharply increase the annual price tag of the Bush plan and skew the tax cuts even more toward the wealthiest taxpayers.)

Every income group would see an income tax cut, on average, but the Bush plan’s income tax changes would reserve the biggest benefit, as a share of income, for the very best-off Americans. The top 1 percent would collectively see a tax cut of 4.7 percent, more than twice as big as the tax changes enjoyed by any other income group, and more than three times the tax cuts received by the poorest 20 percent of Americans. In fact, almost 53 percent of the income tax cuts would go to the top 1 percent. 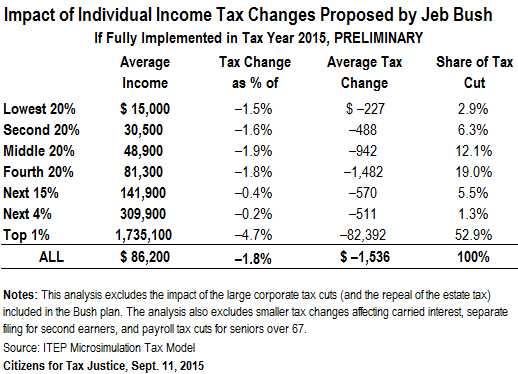 How the Bush Plan Would Cut Taxes: