Impact of the EITC and Child Tax Credit in Addressing Poverty

The federal Earned Income Tax Credit (EITC) and Child Tax Credit (CTC) are among the most important anti-poverty programs in America. The table below examines two types of families living below the official poverty line — those with one parent and two children and those with two parents and three children — and the impact that the EITC and CTC has on them.[1]

The table also demonstrates that a significant amount of this impact comes from an expansion in both credits, which was first enacted in 2009 and will expire at the end of 2017 if Congress does not act. The figures are estimates produced by the Institute on Taxation and Economic Policy (ITEP) microsimulation model. 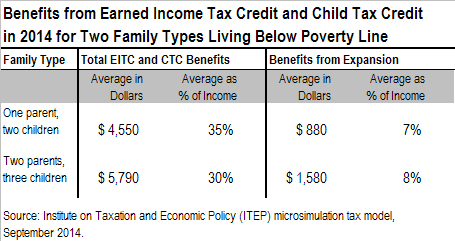 The EITC is a refundable credit equal to a certain percentage of earnings (40 percent of earnings for a family with two children, for example) up to a maximum amount (a maximum credit of $5,460 for a family with two children in 2014). It is phased out at higher income levels. The CTC is a credit equal to a maximum of $1,000 per child. The refundable part of the CTC is equal to 15 percent of earnings (above a specific threshold) up to the maximum of $1,000 per child.

Both credits were expanded—temporarily—in the American Recovery and Reinvestment Act of 2009 (ARRA). The EITC was given a higher credit rate (45 percent) for families with three or more children, and the income level at which the credit begins to phase out was raised for families headed by married couples.

The CTC was adjusted so that the refundable part of the credit is equal to 15 percent of earnings above $3,000, rather than the higher threshold in permanent law (which would be $13,600 in 2014).

These expansions of the EITC and CTC have been extended several times and are now scheduled to expire at the end of 2017.

The table on the first page illustrates that the average one-parent, two-child family living below the poverty line this year will receive $4,550 from the EITC and CTC this year, which boosts those families’ incomes by a little over a third on average. Of that amount, $880 is the result of the 2009 expansions in the CTC, which boosts those families’ incomes by 7 percent on average. (The expansions of the EITC would not impact a family without married parents or three or more children.)