Read the PDF version of this document.

“In its latest annual report, Apple said that as of last September, it had a staggering $54 billion parked offshore (since grown, as the Times points out, to $74 billion).  Almost all of this huge hoard is accumulated in tax havens and has never been taxed by any government. More to the point, most of these untaxed profits are almost certainly United States profits that Apple has artificially shifted offshore to avoid its United States tax responsibilities.

“There’s a simple way to curb this kind of corporate tax dodging, of which Apple is only one prominent example: repeal the tax rule that indefinitely exempts offshore profits from United States corporate income tax. If those profits were taxable (with a credit for any foreign taxes paid), then Apple alone would have paid an additional $17 billion in federal income taxes over the past decade. That would have tripled the federal income taxes that Apple actually paid.

“Congressional scorekeepers estimate that ending the offshore corporate tax exemption would increase overall federal revenues by about $600 billion over the next decade. That’s money that could be put to good use in these times of strained budgets.”

Postscript: In our major study of corporate tax rates last November (Corporate Taxpayers & Corporate Tax Dodgers), we reluctantly included figures on Apple that reported the company’s 2008-10 effective federal tax rate on its reported U.S. profits to be 31.3%. In our notes we pointed out, “For better or worse, we did, with grave reservations, include some potential “liar companies” that we highly suspect made a lot more in the U.S., and less overseas, than they reported to their shareholders (e.g., Apple . . . ). We urge our readers to treat these companies’ true “ef­fec­tive U.S. income tax rates” as possibly much lower than what we reluctantly report. We will be working more on this issue.”

Since then, we have spent quite a bit more time studying Apple’s annual reports. As our letter to the New York Times above notes, at the end of Apple’s 2011 fiscal year, it had accumulated $54 billion in cash offshore, almost all of it in tax havens, and almost all untaxed by any government. Since Apple’s profits stem mainly from its U.S.-created technology, most, if not all, of these untaxed profits are almost certainly United States profits that Apple has artificially shifted offshore.

If we treat all of the untaxed portion of Apple’s offshore profits as really U.S. profits that were artificially shifted to offshore tax havens, then Apple’s U.S. tax rate is much lower than Apple reports. Under this approach, Apple’s 2008-10 effective federal tax rate comes to only 13.4%, and its effective federal tax rate over the last six years (2006-11) was only 12.1%. (Likewise, Apple’s revised effective state tax rate in 2008-10 was only 3.6%, instead of the 8.0% we reported in our state corporate tax study issued last December.)

This alternative calculation is not necessarily perfect, since some of the profits Apple booked in tax havens may have been shifted from foreign countries in which it actually does real business (such as countries in Europe). But even if only three-quarters of the untaxed tax-haven profits are really U.S. profits, then Apple’s actual 2006-11 federal tax rate is still only 14%, less than half of the 31% tax rate that Apple’s annual reports indicate.

A table showing the alternative calculations for Apple’s effective tax rate is at the bottom of this page.

Post-postscript: How do we know that Apple paid no tax to any government on almost all of its offshore cash hoard? Surprisingly, Apple actually tells us, although it takes a close reading of Apple’s annual reports and a knowledge of U.S. tax laws to understand.

The key is this: the U.S. indefinitely exempts U.S. companies from tax on the profits of their offshore subsidiaries. Only if a foreign subsidiary pays a dividend to its U.S. parent are those profits taxable. If the subsidiary has already paid income tax to foreign governments, the parent company gets a “foreign tax credit” against its U.S. tax for that foreign tax.

So here’s what Apple reveals in it annual reports: Apple says that if it told its foreign subsidiaries to pay Apple the whole $54 billion offshore amount as a dividend, then Apple would owe $17 billion in U.S. federal income taxes. That reflects a $19 billion tax at 35 percent, less a $2 billion foreign tax credit (the sum of all the foreign income taxes that Apple has ever paid). Which means, with a little more arithmetic, that about 90 percent of the $54 billion in accumulated offshore profits has never been taxed by any government. 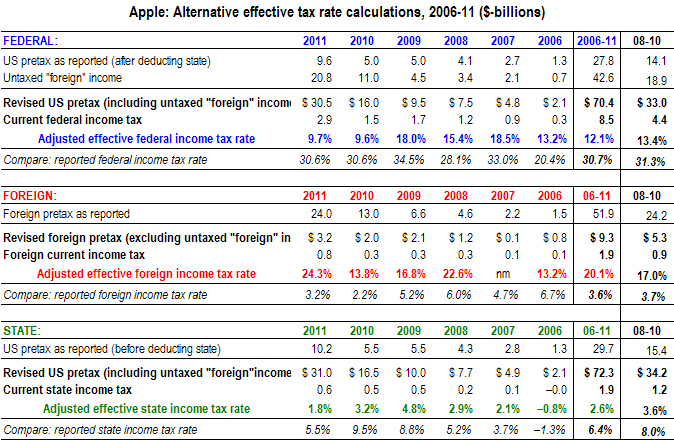